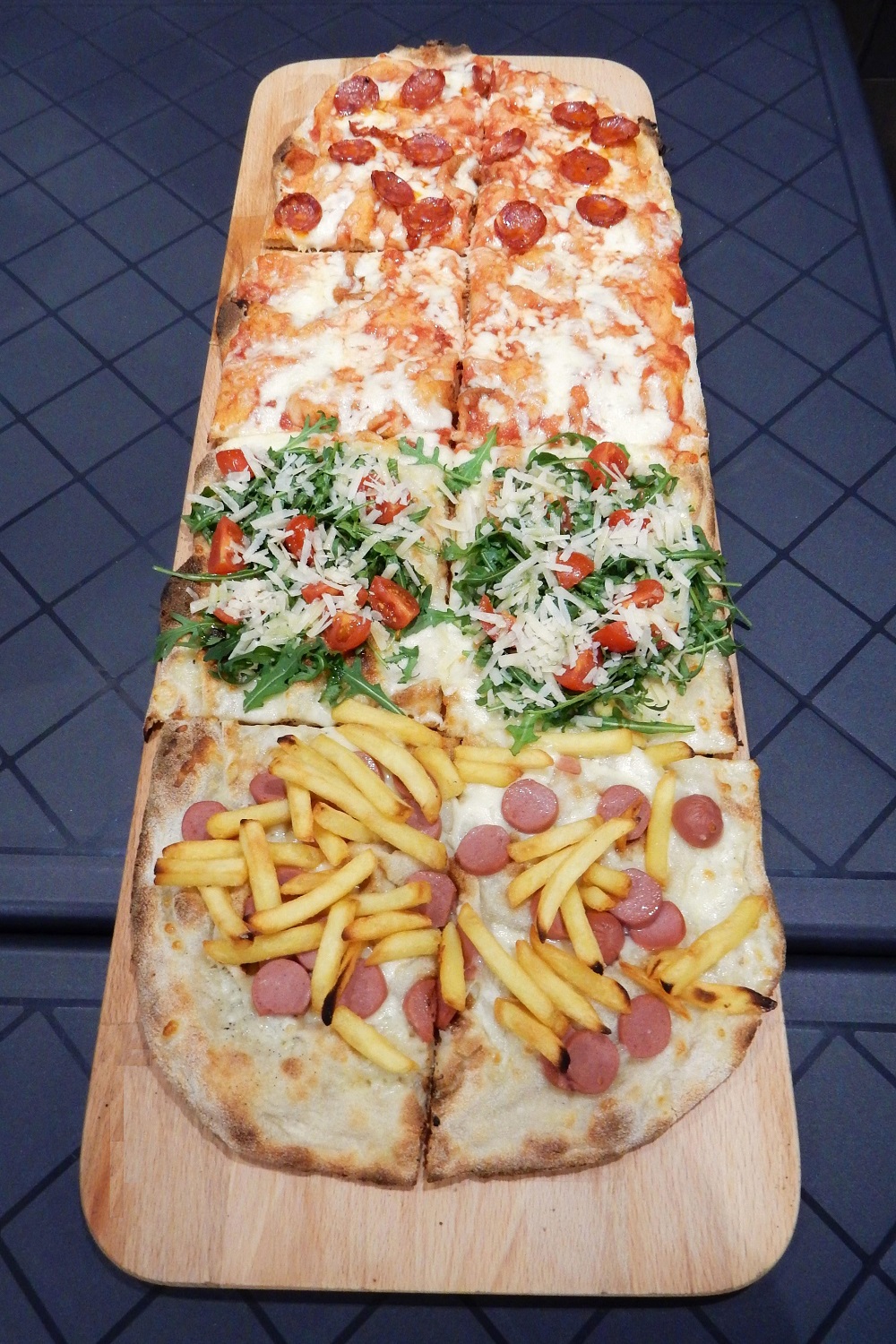 The curiosity in me made me do some research the moment I first heard about this word. I found out that it is an Italian word, and it has been explained differently, which is mainly caused by regional variations.

There are several confusions between the word cornicione and crust, which many people associate with having the same meaning.

If you do not know the meaning of this word, keep reading as I will discuss its meaning and, most importantly, how to make a cornicione pizza.

In simple terms, a cornicione is also known as a crust. Nevertheless, in countries such as Great Britain and the US, the pizza’s whole base is what is referred to as the crust. This is where the difference comes in when it comes to Italy.

In Italy, the cornicione refers to the edge and rim of any given pizza. The cornicione is classified as being airy, light, crunchy on the outside, and with a soft and smooth texture from the interior parts. 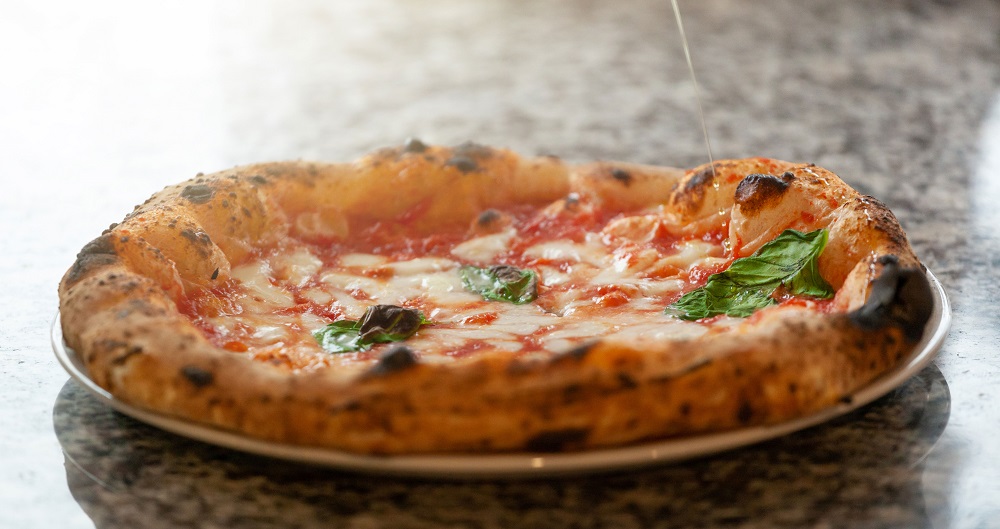 The New York-style pizza does not meet the threshold for it to be regarded as a cornicione, and this is because the base or the crust of this pizza is usually very rough compared to a pizza cornicione.

The Neapolitan pizza style’s main unique feature is the use of sauce in the centermost part of the pizza, which makes the pizza crust rise, the texture smoothening, and becoming airy.

A perfectly-created cornicione pizza is usually made by pushing the dough’s air and usually at the bottom of the dough towards the edge. This is what makes the outer rim of the dough airy.

The only way that you can create a perfect pizza cornicione that is of a Neapolitan style is by baking the pizza at extremely intense temperatures of about 800 degrees. The high temperatures will ensure that you have a crispy crust and airy but with a smooth and chewy texture in the middle.

What parts make a pizza?

Generally, pizza is made of four main parts: the toppings, cheese, tomato sauce, and the base crust. The base crust can further be subdivided into two other parts: the outer rim or the edge of the base and the flat middle part.

As I described earlier, most countries refer to the base as the pizza crust, but that is not the same case when it comes to the Neapolitan style pizzas, which only refers to particular parts of the pizza.

Well, now you understand the meaning of pizza cornicione. The other thing that you need to understand is the origin of this name and when it began. An association was set up in 1980, and the idea was to create and practice making authentic Neapolitan pizzas.

A detailed document was then written that gave the specifications of what types of mozzarella and flour should be used when making the Neapolitan style pizzas. When it comes to the cornicione pizza, the dough is always prepared by two rising processes. After the creation of the second base, the pizza is ready to be formed.

Traditionally, the cornicione pizza is created by stretching the dough with your hands and not using a rolling pin. The use of your hands makes it easy for you to get an accurate and exact dough shape.

According to the specifications, the pizza center must be at least 0.25cm, with the crust’s edges being more prominent than the center. The cornicione, which is the edge of the pizza dough, is usually between 1 and 2cm. If the cornicione does not meet this requirement and other documented requirements, it is not classified as an authentic Neapolitan pizza.

How to make a perfect cornicione pizza

The first step to making a perfect cornicione pizza is by creating a perfect dough with the correct flour. The other important factor is how the dough is stretched. So, to get the best out of this pizza, you need to stretch the dough to a maximum of 35cms, which is the diameter.

Kneading the dough with your hand is always a better alternative than using automatic devices as it gives you consistent dough that has the right amount of moisture with a soft texture.

Fermentation is essential when making the cornicione pizza. The process of fermenting the dough should be long and slow such that when baking, you will see the presence of airy bubbles at the edge of the cornicione.

An authentic Neapolitan pizza’s specification and requirements suggest that the fermentation process should be between 8-24 hours, but you can go for longer than the stipulated hours. If you want to get a longer fermentation time, you need to reduce the amount of yeast used when kneading the dough.

Just as a reminder, the type of flour used will also influence how the dough proofs. You need to choose high-quality flour for you to get perfect proof. For instance, if you use all-purpose flour in making this pizza, the dough will definitely overproof.

Over proofing will make this dough flat and heavier than the standard required because the dough does not have the ability to keep the gas in it. Besides, the dough will not be airy, and it will also lack bubbles.

Shaping and stretching of the pizza cornicione

The best way to prevent the pizza cornicione from losing its shape is by not touching the edge or the cornicione pizza rims. The air bubbles formed during the fermentation process may lose their shape if it is continuously touched.

I highly suggest that you use your hands when making the dough for a pizza cornicione. The disadvantage of using a rolling pin or any other automated device to make the dough is that it will squeeze the gas out of the crust’s edges, which then leaves you with flat and dense edges.

When stretching the dough, use three fingers from each hand to press the dough from the middle towards the dough’s edges. This would lead to the edges of the dough being pronounced and slightly higher than the base of the dough.

Before baking the pizza, you can add a wide variety of toppings to the crust. Here there are no limitations, and you can add your favorite toppings while integrating them with the traditional toppings.

When it comes to baking the pizza, you must bake the pizza in an extremely hot oven. I prefer an outdoor oven like the wood-fired oven because it tends to distribute heat evenly around the oven, which means your pizza will be perfectly baked.

However, if you can still use a kitchen oven to make this pizza, you need to pre-heat the oven to reach maximum temperatures before throwing your pizza in the oven.

High temperatures are essential when baking pizzas because it reduces the amount of time that your pizza will bake at. On the other hand, low temperatures will make your pizza crust super dry. The dryness is brought by the longer heating time, which leads to the evaporation of water from the crust.

Alternatively, you can use a pizza stone while baking this pizza. A pizza stone will absorb heat when pre-heated it will then release the heat to the pizza slowly, making sure that the pizza base is crispy.

The last alternative that you can use to get your pizza baking up quickly is the use of an oven grill. The grill or broiler will provide extra heat for the pizza, but you should be very careful when using both these appliances as the pizza will burn very fast when it is not controlled and watched.

In Italy, almost every pizzeria will have a cornicione pizza that is usually wonderfully crafted. Like I described, cornicione is an Italian word that means the edges of the crust. However, the meaning of this word changes when you move to other places in the world.

It is important to note that for the pizza to be classified as cornicione, it needs to be crispy on the exterior parts and soft in the middle. Pizza cornicione is one of the most popular pizzas worldwide.

When it comes to Neapolitan pizzas, pizza cornicione is classified as one of the top classics due to the specifications involved during its making. It usually is light, chewy, and delicious, which why many people love this Italian pizza. If you have never tried making this pizza, add it to your to-do list, you will not regret that decision.