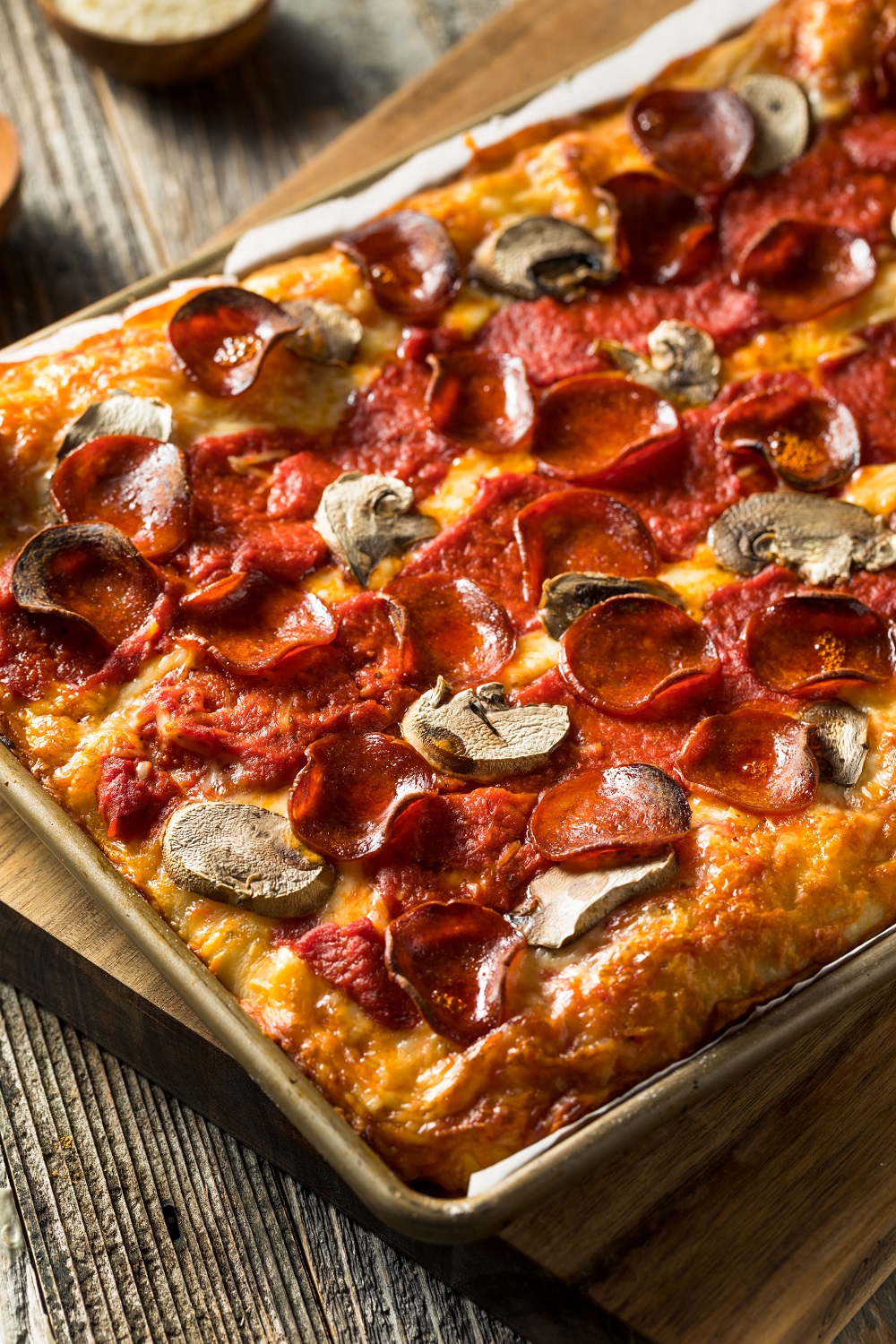 But, you cannot mention pizza in the United States and fail to mention Detroit-style pizza.

The Detroit-style pizza is a unique type of pizza because of its shape. Like Sicilian-style, it is square.

Here is everything you need to know about this mouth-watering delicacy that traces its roots at Buddy’s Pizza.

What makes a Detroit-style pizza?

The Detroit-style pizza is like no other style of pizza. Four things make it different—the shape, the process of preparation, the crust, and the cheese used. 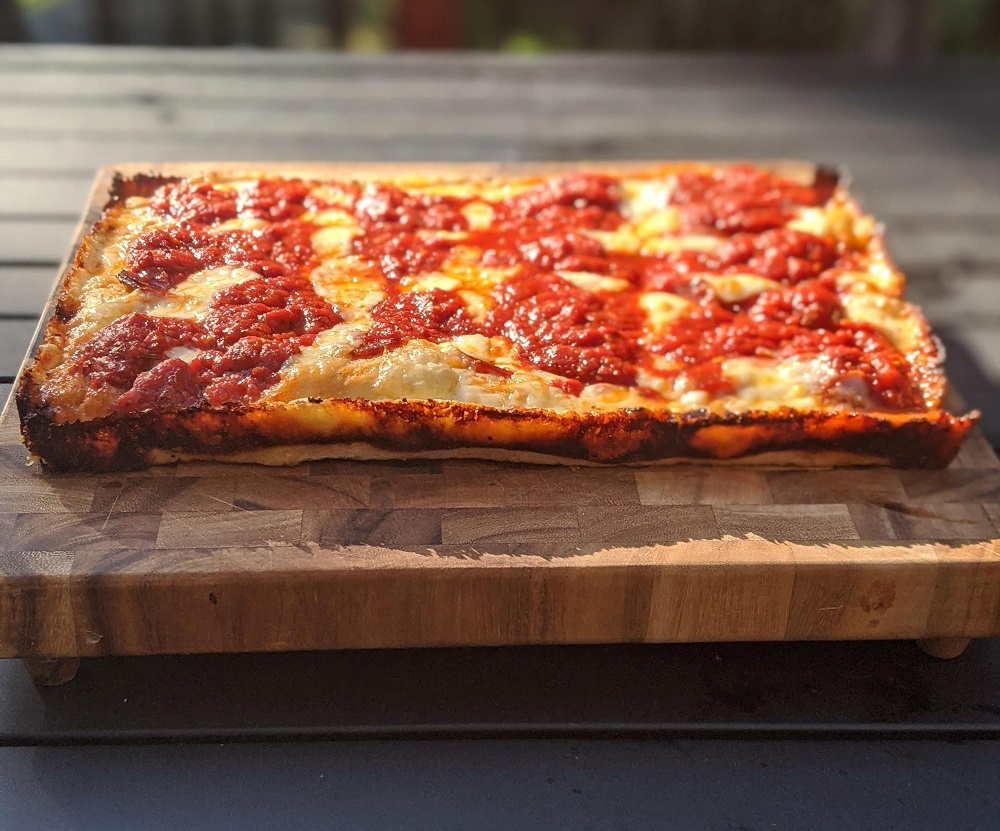 The Detroit-style pizza is rectangular, but locals call it a square pizza.

The chefs use a pan for baking it.

Auto companies used these pans to hold auto parts in the past. It is essential to use this kind of pan if you want a crunchy crust for your pizza. This is because it has a thick metal coating. 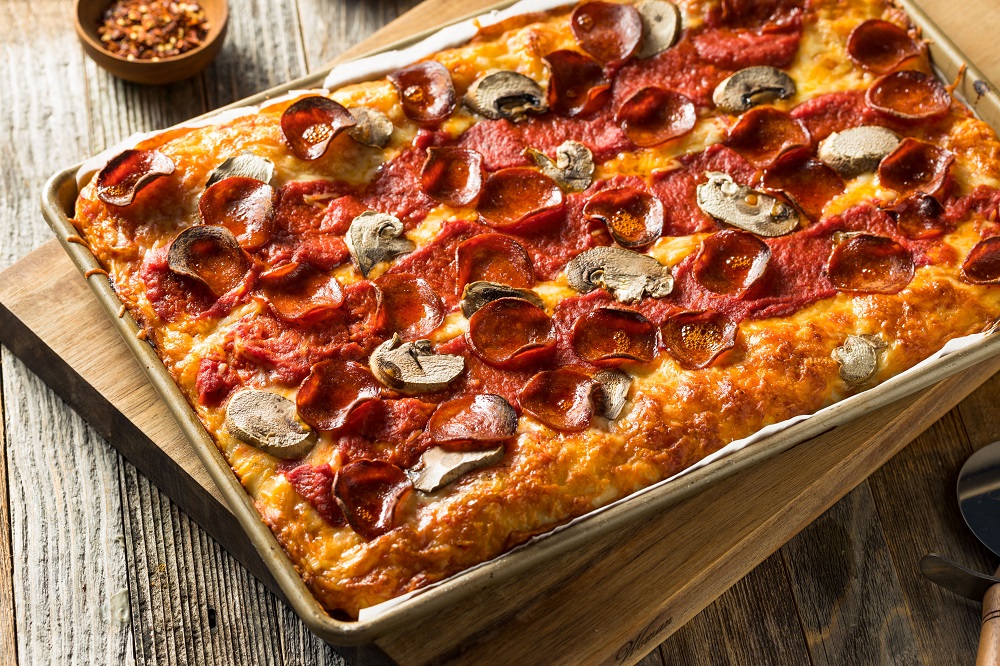 Initially, the pans used had silicon coating. This did not result in crusty pizza, plus the pans were not durable. Over the years, fewer and fewer companies have been producing this pan, making other restaurants opt for other pans types.

The pan is wider at the top than at the bottom, giving rise to pizza bigger than at the bottom. The original pans come in two sizes. An eight-by-ten-sized pan produces four slices and a ten by 14 pan, which gives rice twice that.

Restaurants like Buddys have tried to come up with bigger pizza, but it was impossible since the dough could not stretch enough.

The crust of a Detroit-style pizza is crunchy, airy but strangely, still chewy. The dough is like the spongy focaccia, where you then press the toppings and then add the cheese, pour the sauce on it, and then add the olive oil.

Brick cheese is the best cheese ever made. Brick cheese was first made in Wisconsin in 1877 by John Josia. It is a mild cheese that is cultured at very high temperatures. 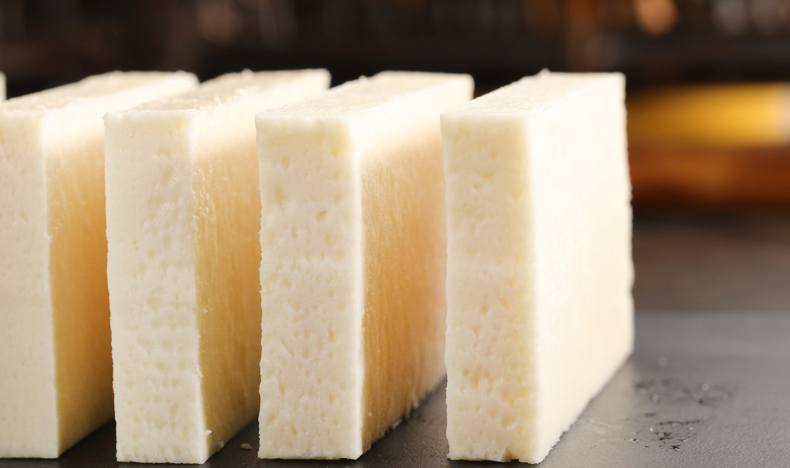 It gets more potent as it ages. Manufacturers then press the cheese using bricks hence its name. Then it enters a brine. It is brick-shaped.

Brick cheese has a more distinctive taste compares to mozzarella. It melts in the mouth just like Mozarella bit it has more flavor.

Detroit style pizza was invented unintentionally by  Gus Guerra in 1946. An idea of improving the menu came to him leading him to convert his neighborhood bar to a restaurant. It was called Buddy’s Rendezvous.

He took an old dough recipe he had for Sicilian-style pizza and decided to bake the pizza. He got this recipe from his wife Anna, who had got it from her Sicilian mother.

He used Detroit’s automotive manufacturer’s parts pan to make the pizza. He got this pan from a friend working in a factory that used such pans to store parts. This was the beginning of Detroit-style pizza.

He sold the restaurant seven years later. The restaurant is still there today, having 16 locations in Detroit. It is famous for the pizza, and visitors visiting Detroit have to stop by this famous spot.

How to eat a Detroit style pizza

Detroit-style pizza is quite thick compared to other types of pizza. This means that the usual eating with hands while folded does not work. You can eat it using your bare hands or use a fork and knife.

How is the pizza layered?

For most pizza styles, you put the pepperoni on top of the cheese and sauce. However, in a Detroit-style pizza, the pepperoni is put under the sauce and cheese. It is usually completely covered. This keeps the pepperoni from being salty crispy.

After layering the pepperoni, add the cheese and then pour red sauce on top. The red top is what gives the Detroit style its name Detroit Red Top.

Having a red top stops the crust from being soggy as most of the liquid is on top.

The dough resembles a focaccia dough. It has a thicker crust compared to the new york style pizza. Ithe bottom of a slice is quite thick, but the edges are not.

The edges are golden brown and crispy. The toppings spread to the edge of the pizza, which is not common in a circular pizza. Therefore every bite is delicious.

How is Detroit-style pizza different from Sicilian pizza?

Both Detroit-style pizza and Sicilian pizza have a square shape that is unique for pizzas. However, these two should never be confused as they are quite different.

The Detroit-style pizza uses brick cheese on its pizza, which melts wonderfully in your mouth when you take a bite. It gets more potent as it age. This makes the pizza airy and hydrated.

In a Sicilian-style pizza, the cheese used is called caciocavallo cheese.

The Detroit-style pizza uses blue steel pans, while the Sicilian-style pizza one can use any pan.

A Sicilian-style pizza is mostly square but can be found in round shapes too. For a Detroit pizza, it has to be squared to be called a Detroit-style pizza.

The edges of the Detroit-style pizza are dreamier and more crispy than in a Sicilian pizza. Some restaurants use caramelized cheese from edge to edge, which gives it a fantastic flavor. This is not a common thing in Sicilian pizza.

In a Detroit-style pizza, the pepperoni is at the bottom of the toppings, then cheese is layered next, and finally the sauce. This makes the crust remain crusty without getting soggy. The sauce is added after baking or in the mid-process.

In a Sicilian pizza, the process of layering does not matter. You can put anything first. You then add the sauce before baking. Finally, you spread Breadcrumbs on top of the sauce.

Where is Detroit Style Pizza served?

Detroit-style pizza is available in many spots. However, we have listed for you some of the famous locations where you can go and enjoy your pizza.

This is the home of Detroit-style pizza. It was founded in 1946 by Gus Guerra and still a major spot in Detroit, 75 years later. This restaurant has 16 locations. It is famously known as Buddy’s pizza.

What makes Buddy’s pizza the place to be is the sauce used. A classic Detroiter has cheese and bright sauce with pepperoni on top. The pepperoni is crispy with just the right amount of salty. It still provides bar services and is the perfect place to have a drink as you enjoy your pizza.

Buddy’s pizza has indoor dining, with a bar area with pictures of Tigers’ legendary players. There is also outdoor dining, which has ball courts outside. They also allow for deliveries and takeouts. Today they have gluten-free options available. 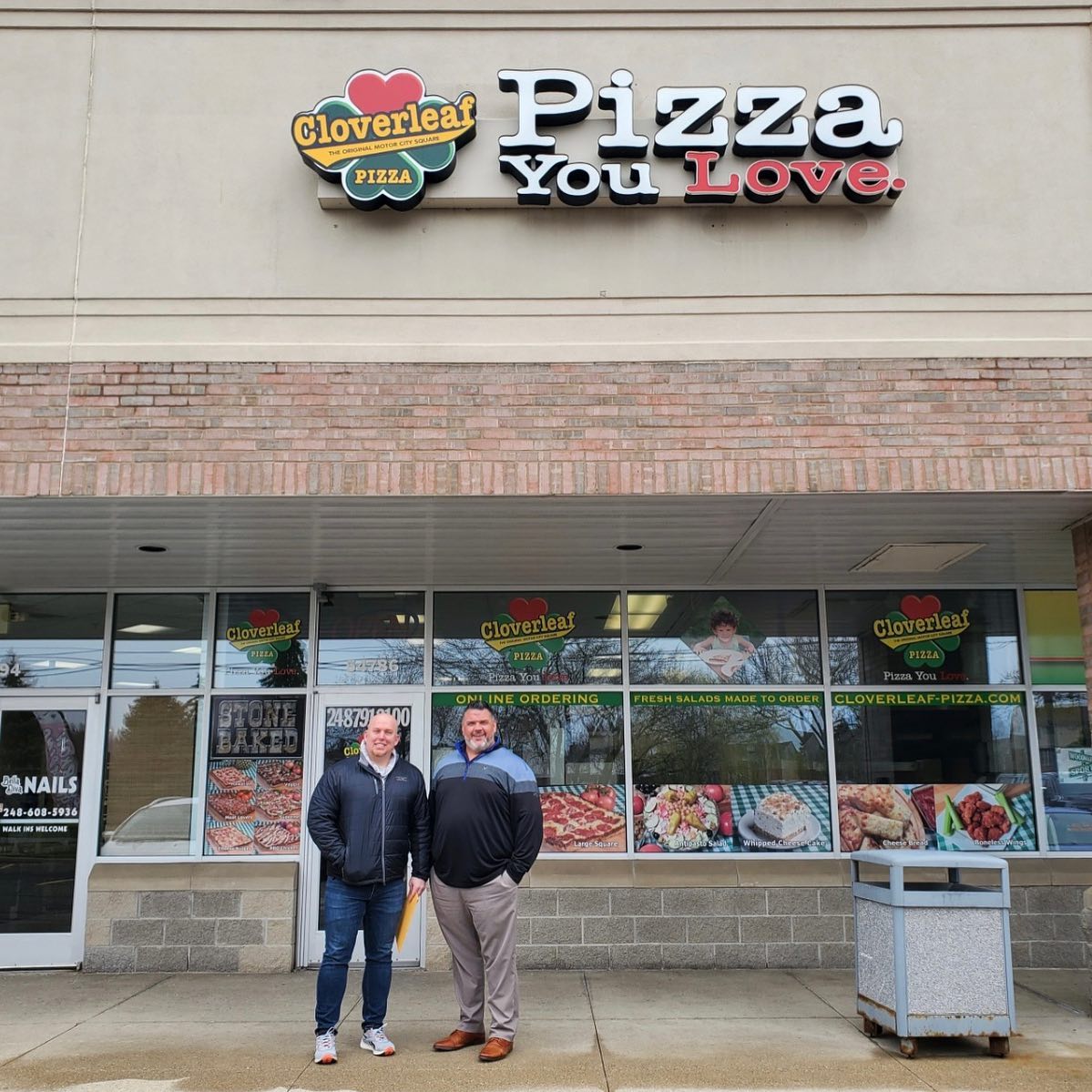 Cloverleaf was opened in 1953 by Gus Guerra and Anna, the parents of Detroit-style. It is in Eastpointe suburb. He used the original recipe to make detroit0style pizza in his new location. They house an open-air oven to make the pizza.

It is strange that despite using the original recipe, food critics still found Buddy’s pizza better than Cloverleaf. However, their reputable slice edges are very crispy and nice.

Cloverleaf offers gluten-free options too. You can order a pizza and have it delivered or have the takeaway option. They also have patio dining that is, of course, seasonal.

There offer lunch buffets, and in case you are looking to have a pizza party, you should contact them. They also have a menu for your children hence a perfect location for family lunches and dinners. All this comes at very reasonable and affordable prices. 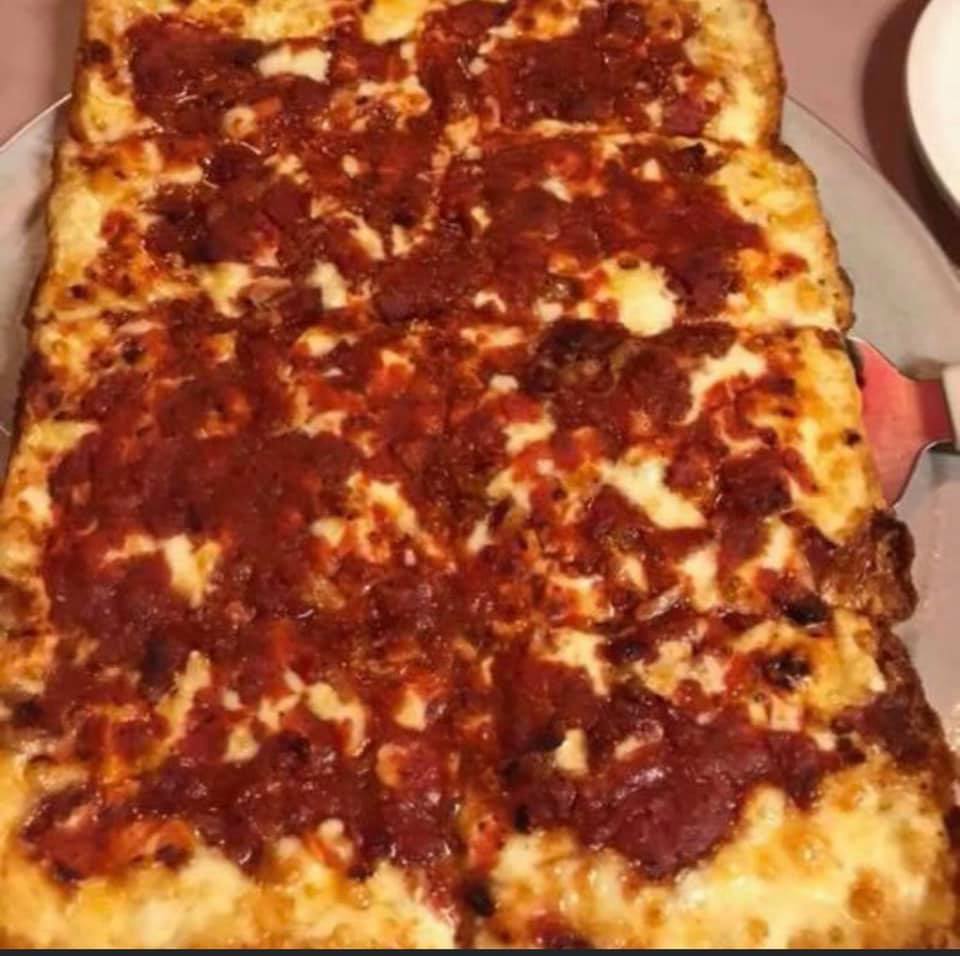 This is another popular spot in Detroit. Their pizza is heavy on cheese and extremely delicious. The founder of Louis pizza was one chef called Louis Courtois. He used to work at Buddy’s Rendezvous. When Gus decided to sell the restaurant, Louis wanted to buy it from him.

However, another buyer won. He moved to work at Shield’s, where he had an arrangement with the owner to make pizzas for bar guests for free in exchange for kitchen space. After some time, the restaurant got a new owner, who blocked Louis from entering the restaurant.

He decided to start his place in Hazel Park. The restaurant has existed for three generations, but they remain in a single location to focus on pizza quality and excellence despite its popularity.

This spot holds its traditions, dear. The decor consists of checkered tablecloths. It also has Chianti bottles hanging from the ceiling that makes this place cozy and homey.

There are usually long lines at the restaurant, which is common for amazing spots. However, if you go during off-peak hours, the wait might not be that long. 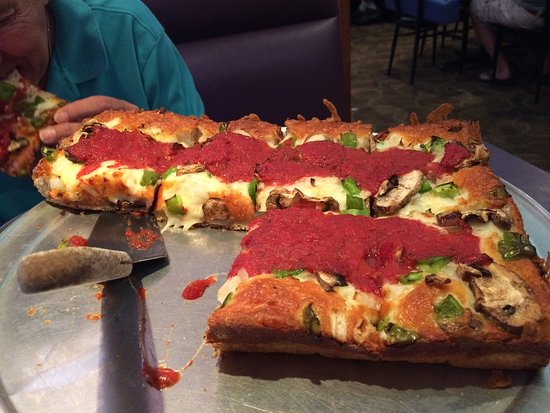 Shield’s is another amazing spot. Shield’s was initially not selling pizza until Louis offered to make pizza in their restaurant in exchange for kitchen space.

When ownership of the restaurant changed and locked Louis out, the new owners decided to replicate the Detroit-style pizza recipe.

A lot of cheese and toppings characterizes Shield’s pizza. Next time you are in Detroit, you can try it out. 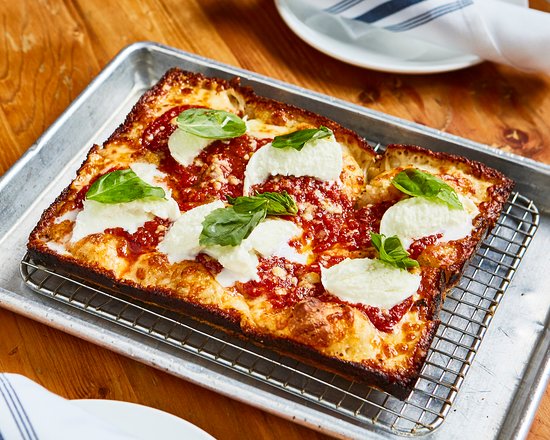 Chef Mathew Hyland, Emily Hyland, Howard Greenstone, and Ken Levitan are founders of Emmy Squared. This was in 2016 in Williamsburg.

It concentrates on square Detroit-style pizza only. Eater describes Emmy Squared as one of those irritating places that do everything well.

This is a restaurant located in San Fransisco, California.  Toy Gemignani, who wrote the Pizza Bible owns it.

You might be lucky to get a Detroit-style pizza here as it is only on the menu occasionally. The next time you are in San Fransisco, you might pass by and ask.

They have different types of Detroit-style pizza. If you are a meat lover, you can try the Works. It has a lot of pepperoni, bacon, meatballs. And sausage on one pizza. 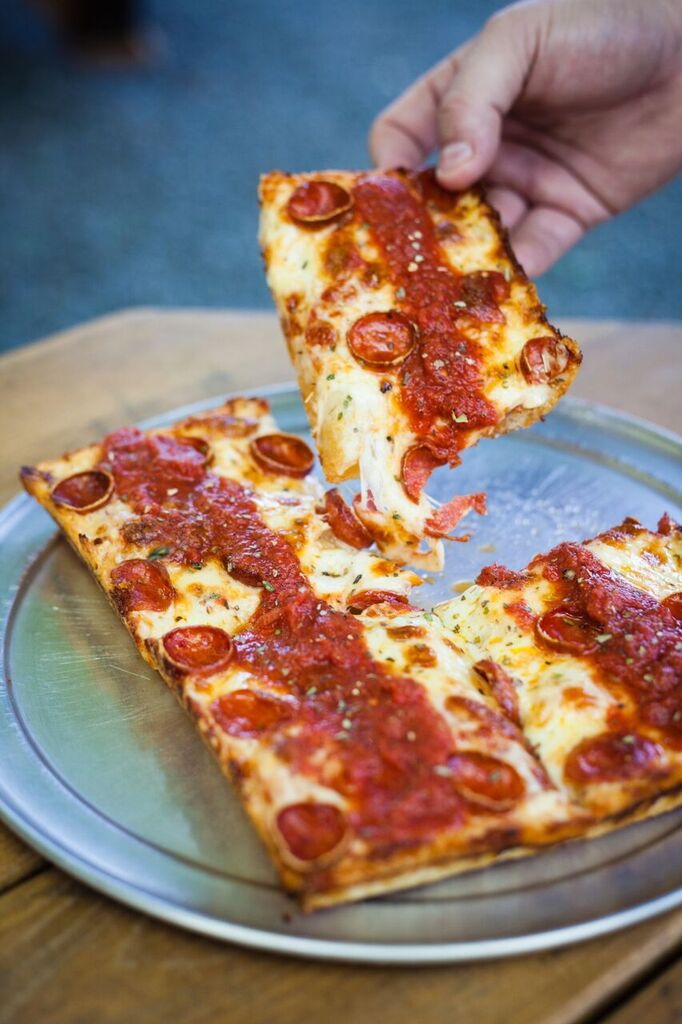 Via 313 is in Austin, Texas. It is a famous place. It made the Eaters’ list in 2013 as one of the Hottest Pizzerias in the United States.

The owners Zane and Brandon Hunt, grew up in Detroit, where they enjoyed the Detroit-style pizza from Buddy’s, Loui’s, and Cloverleaf. Feeling Nostalgic and wanting to have this at their new home in Austin, Texas, they opened Via 313.

They serve authentic Detroit style pizzas where the put smoked pepperoni under the cheese. 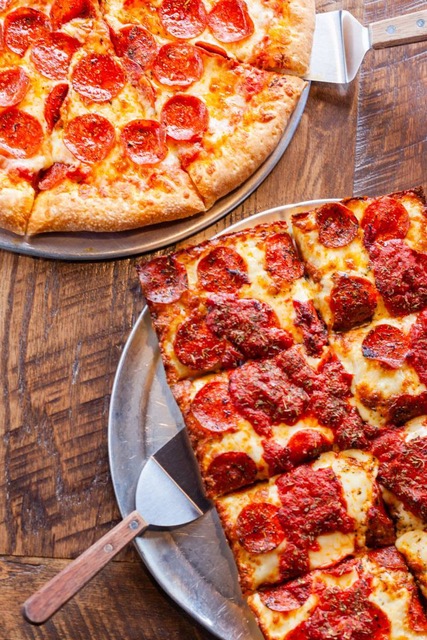 This amazing pizzeria is in Hendersonville in North Carolina. A Michigander does not own it. When the owner opened it, she wanted to be unique.

There were already Chicago and new-york style pizzerias. Since she wanted to be different, she opted for Detroit style pizzeria. It became a success. 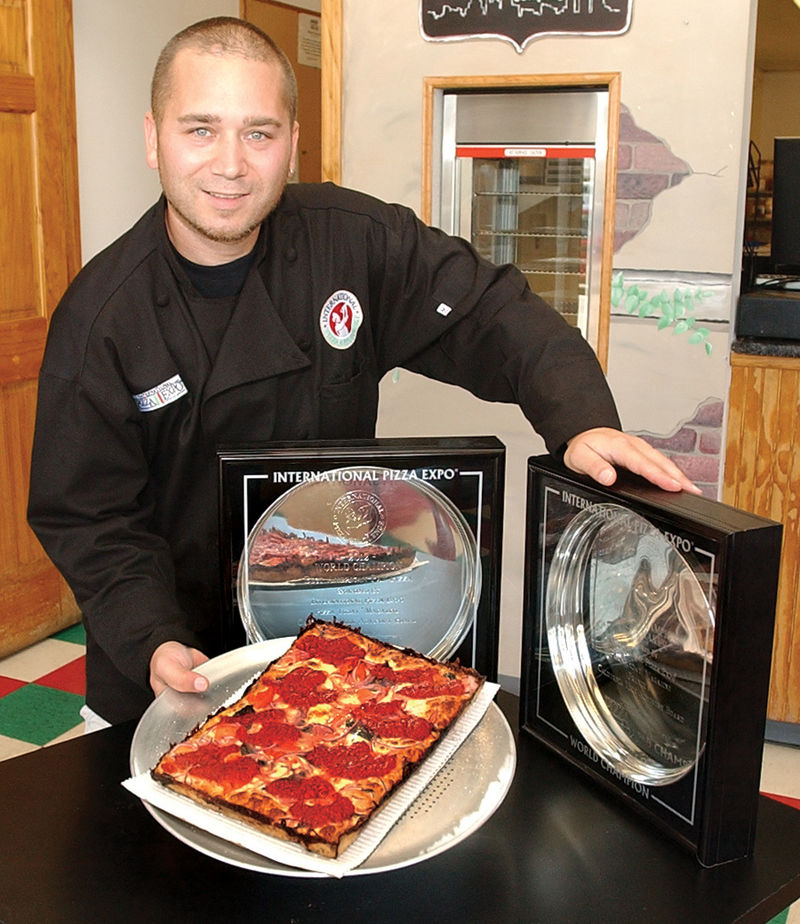 This amazing spot is one of the newest companies that sell this authentic dish. It is based in Clair Shores and run by Shawn Randazzo, who is a well-known pizza champion.

In 1997, the owner of Cloverleaf wanted to sell the restaurant, and Shawn, being a 19-year-old, decided to buy it with the mother.

He owned Cloverleaf for 16 years before he decided to have his restaurant hence opened Detroit Style Pizza Company. He was made the world champion pizza maker in 2012, which made it easier for his own restaurant’s success.

This is a place you should check when you are looking for a modern taste of Detroit-style pizza.

Detroit-style pizza is a mouth-watering dish with a deep history. We cannot argue that Buddy’s pizza was the ancestor of this pizza. Looking at most of the restaurant owners selling this pie, they all at some point had been part of Buddy’s Razvendous.

We are in love with how it looks, the uniqueness of its shape, the caramelized cheese, and the dreamy brick cheese used.

Since most of the places selling the Detroit-style pizza are descendants of buddy’s, the recipe is almost similar; therefore, you can visit whichever spot and still have a fulfilling lunch. 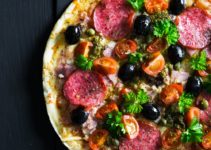 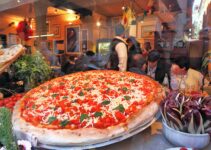