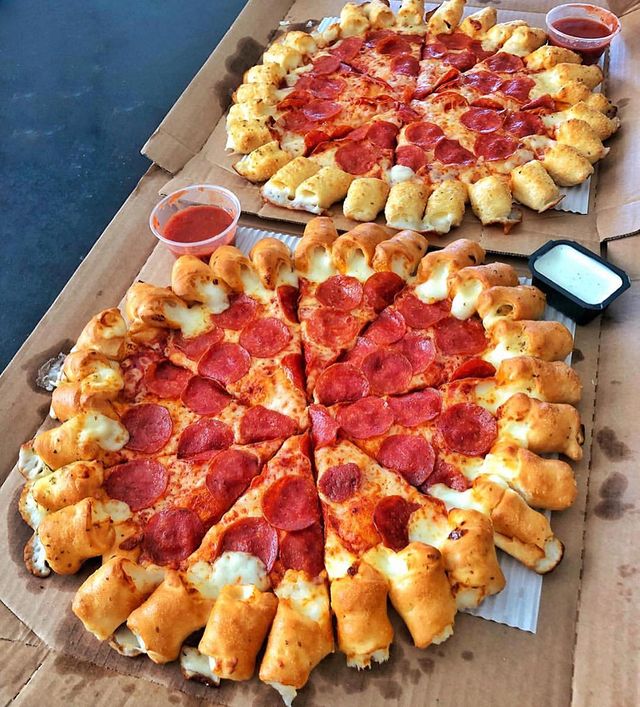 Costco is undisputedly one of the best lunch deals in the United States of America. Their food court serves a wide range of fast foods spreading from hotdogs to smoothies.

It is famously known for its extremely affordable $ 1.49 hotdogs and a 20-ounce soda. It is also known for having one of the largest pizzas available.

If you are a pizza lover, you would agree that one slice is never enough unless it is at Costco because of its size.

Costco as a competitive pizza place

Costco is one of the largest pizza outlets in the world. It is ranked number 14 best-doing pizza chain in the United States.

This is crazy considering it is a wholesale warehouse that focuses on selling other things like cars, coffins, home essentials, and safari packages all under the same roof.

However, the delicious, humongous pizza that Costco sells in the food court is quite popular. To most food lovers, Costco is just a pizza place. Costco pizza is known for having one of the biggest pizza crusts in the United States.

Costco in other countries

Costco is present in other locations outside the United States. It is in Canada, Mexico, United Kingdom, Japan, South Korea, Taiwan, Australia, Spain, Iceland, and France.

To shop or even eat at the Costco food court, you need a membership card. This is, however, an exception in some outlets.

With this membership that costs $60,  you can eat at any Costco outlet in the world. Say you are visiting Japan and would like to taste the Costco Barbeque chicken pizza that is only available outside the United States.

Just present your membership card, and the Costco employee will enter a code to allow you to shop at the wholesale price, purchase, and enjoy your pizza.

Pizza in the United States

In the United States, Costco’s humongous pizza comes in three types. They include the Pepperoni, Cheese, and Combo pizza. The waiting time for the pizza is considerably shorter than in other pizza joints. At 6 minutes wait, you will have your pizza ready.

Costco has its pie and slices ready before you make your order. You should not worry about getting stale pizza as pizza that stays more than an hour is disposed of immediately. This means that their pizza is always hot and fresh.

Ironically, despite the supremacy of their pizza, they sell the pizza at quite a low price.

How much is Costco Pizza?

Costco has one of the most affordable pizzas in the world. A slice of pizza goes for $1.99 while the whole pizza costs $9.95. These prices apply in all their 700 plus outlets in the world.

Generally, food is very affordable in the Costco food court. Costco sells their food as a way of goodwill to its customers and not for profit. This explains the low prices.

However, as much as the pizza is cheap, do not be fooled into thinking that it is not delicious. Costco has one of the tastiest pizzas in the United States, with a generous amount of toppings served. No wonder the pizza has a cult following.

How many slices in a Costco pizza? 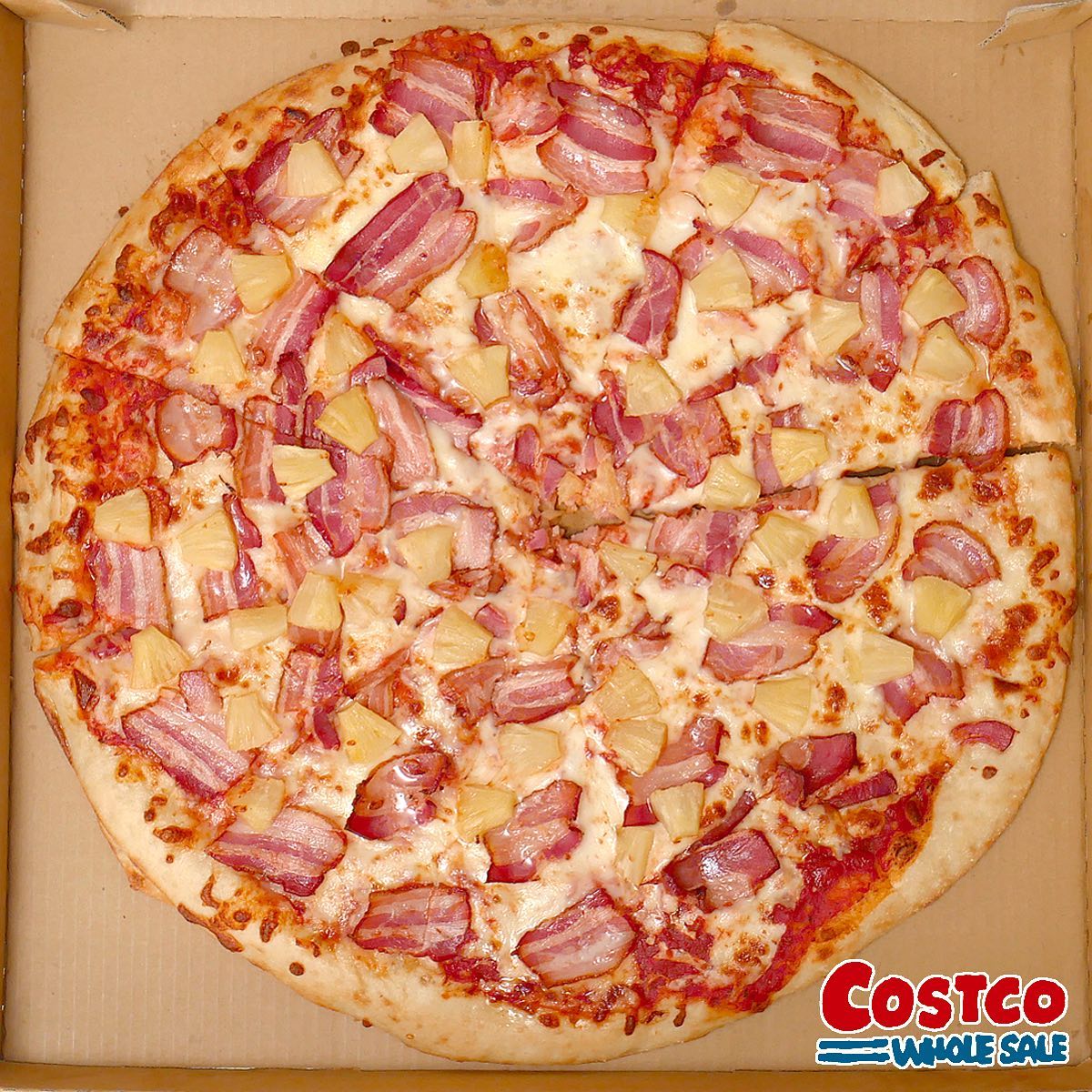 A Costco pizza has twelve large slices. These slices are huge, and you might find them a bit harder to handle.

In case you have small children, you can request the Costco employees at the food court to cut the pizza into smaller pieces. But generally, the Costco pizza comes in twelve slices all over the world.

You can request to have your pizza cut into eight slices.

How big is a Costco pizza?

A Costco pizza is known for its enormous size all over the world. The pizza is 18 inches big. The pizza size has not changed since 1989, despite many chains reducing their size over the years as the cost of production increases.

Interestingly, the deliciousness of the pizza has also been consistent, and so has the prices. Costco food court boasts of consistency as very few things had changed since 1989 when it was still Price Club before it merged with Costco in 1993. 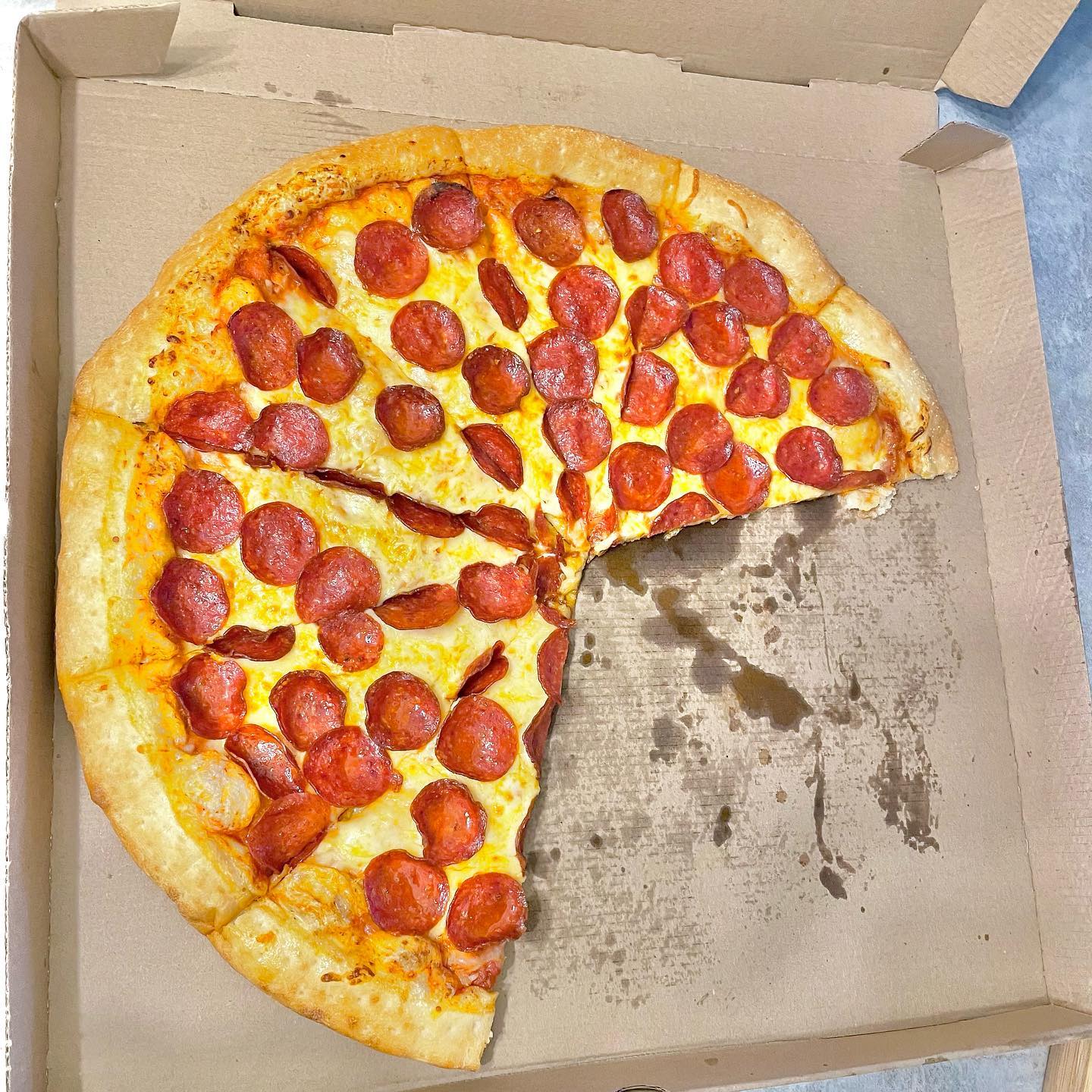 A slice of Costco pizza can hardly fit in a paper plate. It has its corner and edges lying off the paper plate. That would be a gargantuan piece of pizza if you asked me.

As expected, something this gigantic and with lots of toppings cannot be crusty. However, it is not soggy either. If you are a toppings lover, then you are willing to let go of the absence of crustiness. The awesomeness and deliciousness are worth it.

Because of its large size, a Costco pizza can feed a family of four people on average, with each person having at least two slices. If you have a family of four that consists of very young children or members who eat just a little, then you might not be able to finish a whole pizza.

If you have a family of only two members, it might be wiser to buy pizza slices instead of the whole pizza.

Unfortunately, Costco has no online ordering system. If you want a pizza, you can call in to make your order in advance then avail yourself at the food court. Note that some of the Costco branches are members only.

What if you have no membership?

If you have no membership, do not worry. You can still enjoy Costco’s delicious pizza. All you have to do is find an outlet that has its food court outside. These food courts allow cash payments.

If the food court in the store, you can either apply for membership, which costs only $60. This would be very useful if you intend to frequent the store and do your household and grocery shopping there. However, if you only want to eat, get a friend who has a membership and go in with them.

You can try other hacks, like using a gift card to enter the store if they demand membership. The gift card could have zero balance; no one cares. Alternatively, you can be honest and tell them you are there to eat. Some friendly stores will let you in.

Why are Costco’s deliciously large pizzas so famous?

Costco food court is known for its large pizza. However, if you are a person who has tasted or sampled the Costco pizza in different branches, you would notice the consistency in the taste of their pizza all over the world.

Their pizza has almost the same amount of toppings, sauce, and cheese. This brings about the similarity in taste. But how is this possible?

Costco has this Costco pizza sauce dispenser that distributes sauce evenly on the pizza. Every bite you take will taste as wonderful as the previous one and the next one because the magical pizza robot spreads the sauce evenly all over the pizza. The sauce has a lot of influence on the taste of a pizza or any food for that matter.

According to employees at Costco, one cheese pizza contains 24 ounces of cheese. This translates to 1.5 pounds of cheese, consisting of 20 percent of 10 months aged parmesan and 80 percent mozzarella cheese. Costco boasts of using only fresh cheese and never using processed cheese.

For other pizza types like Pepperoni and Combo pizza, the cheese is not as much to provide room for toppings. Pizza toppings like pepperoni have to be weighed before being added to a pizza. All pepperoni pizza has 60 slices of pepperoni. This explains why all Costco pizzas look the same whether you are in Japan, Canada, or the United States.

When you go outside the United States to places like Taiwan and Mexico, you will find other types of pizzas like Hawaiian style, seafood, barbecue chicken, etc.

How to hack the Costco pizza menu

In the United States, Cosco advertises only three types of pizza. This is the cheese pizza, pepperoni, and combo pizza. But did you know that they allow for custom options too? You do not want to be among the many who miss out on this offer.

You can tailor your pizza order as you desire to soothe your tastebuds. You can order half pepperoni half cheese for the same pizza. Or whatever types you love best. Your choice will, of course, be limited to the toppings available in the food court. You can only customize when you are buying a pizza pie, not a slice.

What is the waiting time at Costco?

The waiting time at Costco depends on the time. During the peak time, which is usually around noon, it is common to find a queue of more than ten people. However, the queues move very fast. This is because they make their pizzas in seconds.

It takes approximately 30 seconds to flatten the dough and add the sauce, cheese, and other toppings. Then baking takes at most 6 minutes, having your pizza ready in less than 6 minutes.

Costco uses a dough squisher to flatten the dough and a pizza sauce turntable to add and distribute the sauce. Then the employees add the cheese and other toppings. They then put the pizza on a conveyor belt oven. Just in 6 minutes, this pizza is brown and well cooked.

However, if you are in a hurry and would like to skip the queue, you can add your pizza order while paying for your items. This means you have to be purchasing something at the store. Having a receipt gives you the leeway to bypass the line and go to the front. Considering you have already paid for the meal, you will not waste more time paying cash at the food court window.

Some outlets have digital kiosks. The kiosks allow you to pay for the pizza immediately using a card. Then go pick up your order at the pick-up window. You will not line up like the rest.

Tips on getting extra toppings

Costco boasts of supreme pizzas with generous toppings. But if you are a person that likes more and more, you can still do this at Costco’s food court.

While ordering the pizza, you can ask for extra toppings. It might be your lucky day, and you will get them. This is easier during off-peak hours. At this time, things are slow, and Costco can give special attention to your order.

However, this will depend on the location and management of the store. Some store managers are so friendly and easygoing. They can let this happen. But in a store with a strict supervisor, getting extra toppings might be a little harder.

Costco pizzas are so famously divine. It will be right to say Costco has outdone itself with its pizzas. Being a wholesale warehouse, with just a food court competing against pizza giants and still being number 14, is quite something.

They deserve it because their pizza is amongst the best you will ever taste. Next time you are in a hood with a Costco outlet nearby, make sure you visit. You will be amazed by the enormous pizza and the generous toppings.

Do not forget to apply the above tips on how to get extra toppings. You can ask to have your pizza customized to get the best out of different flavors.  Do not go alone. Carry along with some friends because we bet you will not be able to eat half the pizza alone.