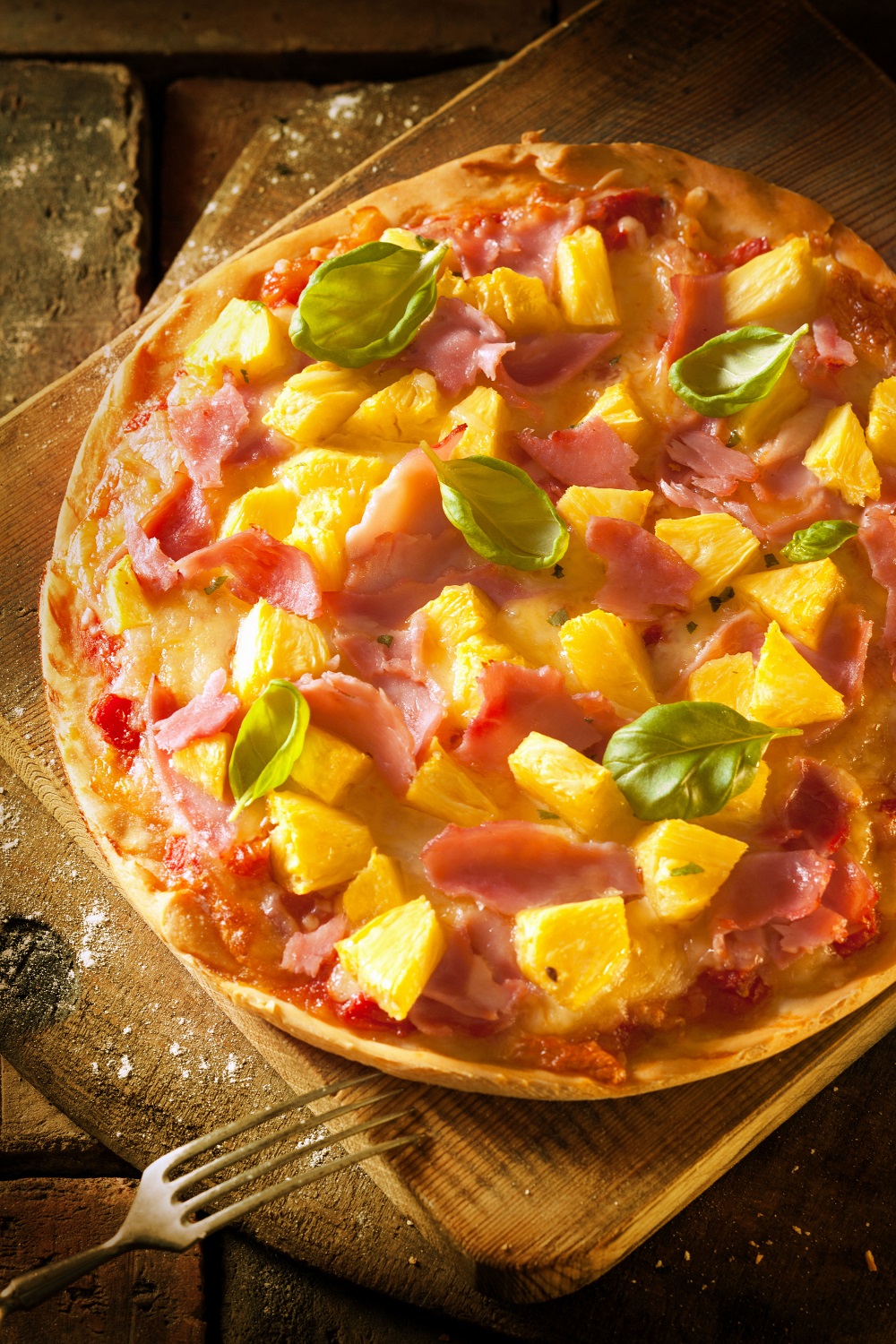 Pizza is one of those foods that has taken the world by storm, and whether you like it or not, it is eaten by a lot of people, and there are millions of pizza restaurants. It is no little wonder that pizza has undergone a lot of changes since its origins in Italy.

As a result of being famous all over the world, pizza has undergone a lot of changes and additions. While some of these changes are widely acclaimed, some have been rejected and disputed by many people.

One of such debates is the Hawaiian pizza that has pineapple as one of its unique toppings. Some people are for it, and others are against it. Whether you like it or not, the truth is that pineapple on pizza has come to stay. This article will focus on the question if pineapple has a place on pizza.

Pizza as we know it today originated in Naples in Italy. It was first developed as a peasant food for poor people and could not afford the regular meal. From plain dough with vegetables, tomatoes were added to the toppings. This food was sold on Italy’s streets, and very soon, even the wealthy began to patronize it.

The popularity of the pizza began to spread that some chefs opened up restaurants to serve mainly pizza, and it was no longer food for some members of society.

It was appreciated by both the rich and poor. From a simple recipe of dough and vegetables, people began to use tomatoes and cheese.

The Margherita pizza became one of the earliest pizza to have its own unique and different recipe and style. It was prepared for the Queen of Italy in 1889. In honor of the queen, the chef made the pizza to resemble the new flag of Italy. Green for the vegetables, red for the tomato sauce, and white for the mozzarella cheese. 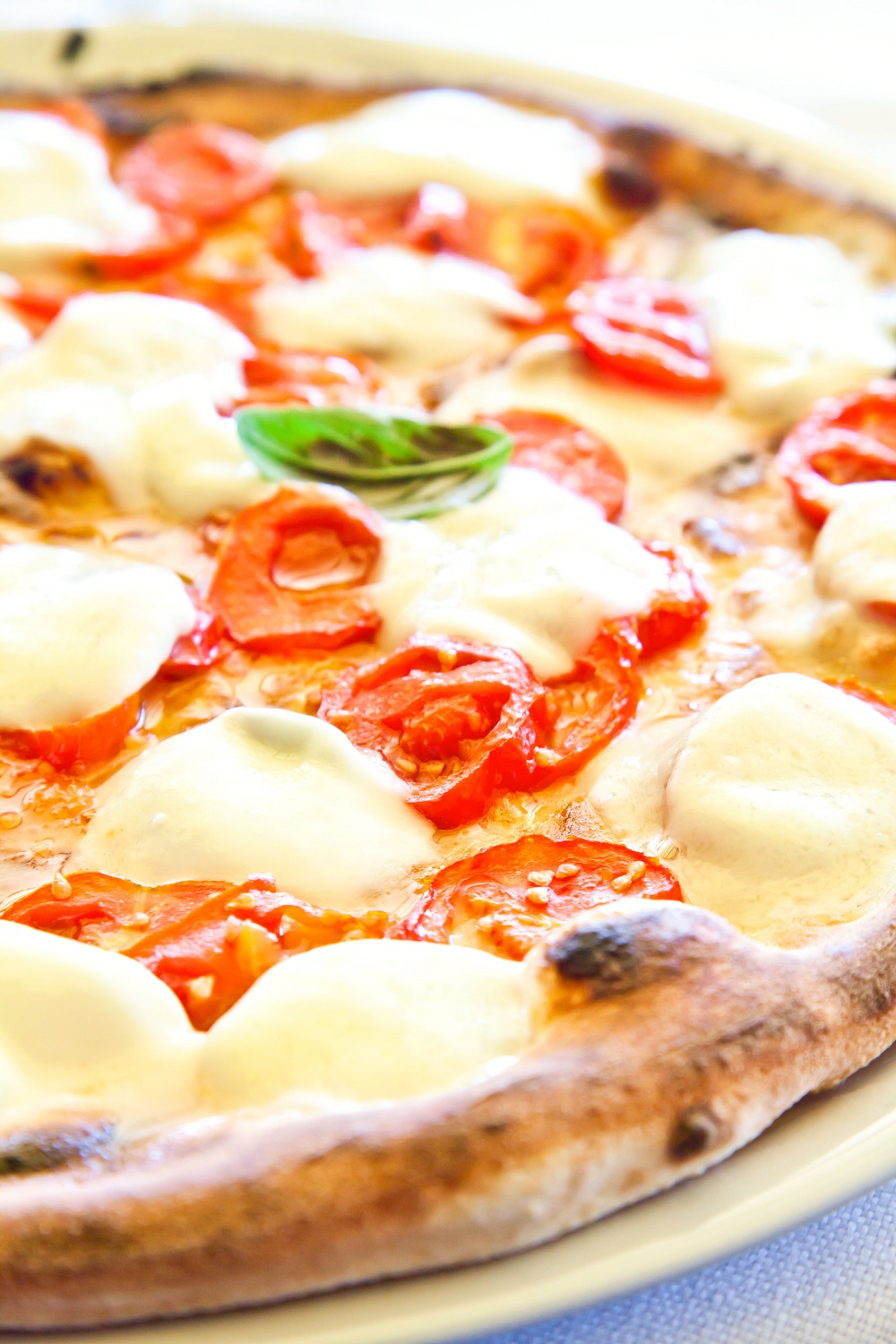 From this point, different pizzerias across Naples and Italy began to develop their unique style of pizza, and hence we began having different recipes and styles. The typical pizza made from dough and vegetables had grown to encompass different ingredients and styles.

Pineapple as a pizza topping

As the pizza experienced changes in Italy, it certainly took the world by storm, and wherever it went, people continued to love it and make some adjustments to it. Chef Sam Panopoulous first prepared pineapple on pizza in Canada in 1962.

Ever since this creation, there have been diverse views and debates if pineapple belongs on the pizza. And with the coming and influence of social media, this debate is very hot online, creating a lot of tension between those who support it and those who are against it. 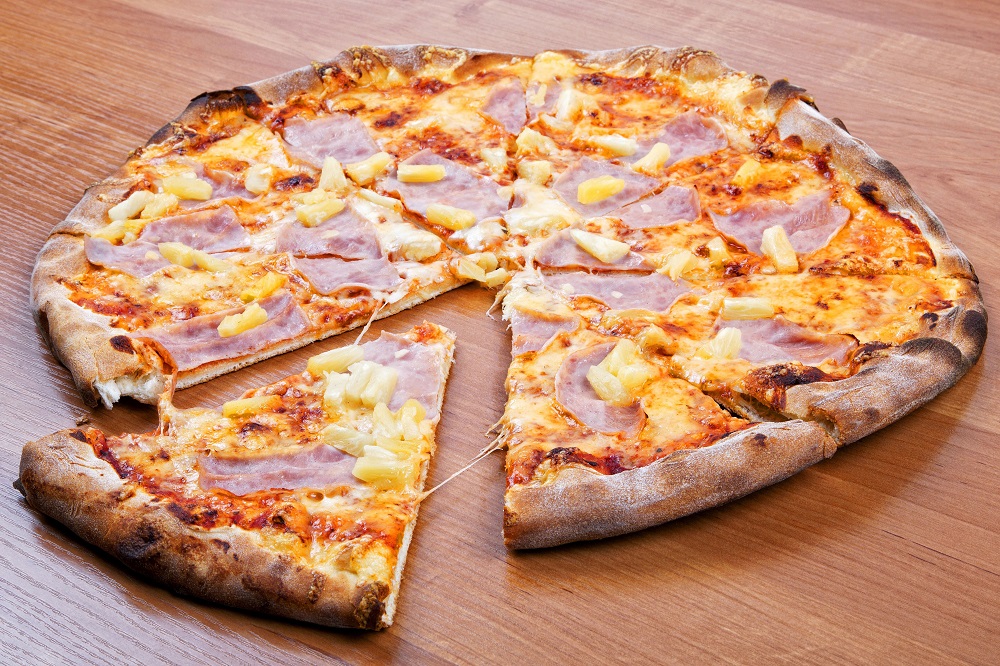 Most people will argue that pineapple is a watery fruit; hence it is very likely to make your crust soggy. This is not entirely true; anyone who speaks this way is quite naïve about how pizza is prepared.

The pineapple used on pizza is grilled before it is placed on the dough, so it would not make your dough soggy. If the pizza paste used for the pizza does not make the crust soggy, then there are fewer chances that the pineapple will do so. These things can be prevented when handled correctly. 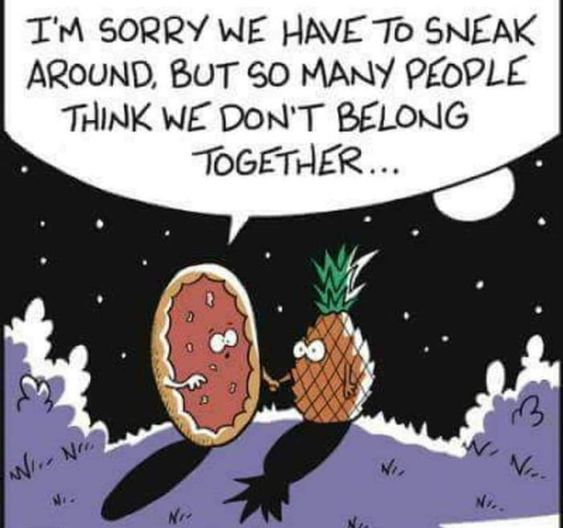 Some others who are against pineapple on pizza tend to go back to the dictionary definition of pizza. Quoting the dictionary, they state that a pizza is an Italian dish consisting of flatbread, with toppings of cheese, tomatoes, vegetables, fish, and meat. Going by this definition, people argue that nowhere does the dictionary mention pineapple.

If the tomato is a fruit and it is among one of the toppings, the pizza can make room for another fruit, pineapple. The truth is that this dictionary definition of pizza is very limiting. Pizza is the second most popular food in the world because of the many varieties that it offers to a lot of people. So, we cannot let this dictionary definition limit our experience of pizza.

One other argument against using pineapple as a pizza topping is that this destroys the original Italian invention. This is quite extreme; adding pineapple on pizza does not destroy or underappreciate the original classic Italian Pizza.

Pizza is a popular food eaten worldwide, so it is not strange to find a few additions and changes. Also, pizza has become so popular because of its ability to adapt to the cultural situation that it finds itself. So I don’t think this recipe destroys the initial Italian invention.

Food flavors are divided into sweet, savory, salty, sour, and bitter tastes. It is not uncommon to find a combination of one or two of these flavors in one meal. Our taste buds can feel each flavor, and when done correctly, it is incredible. 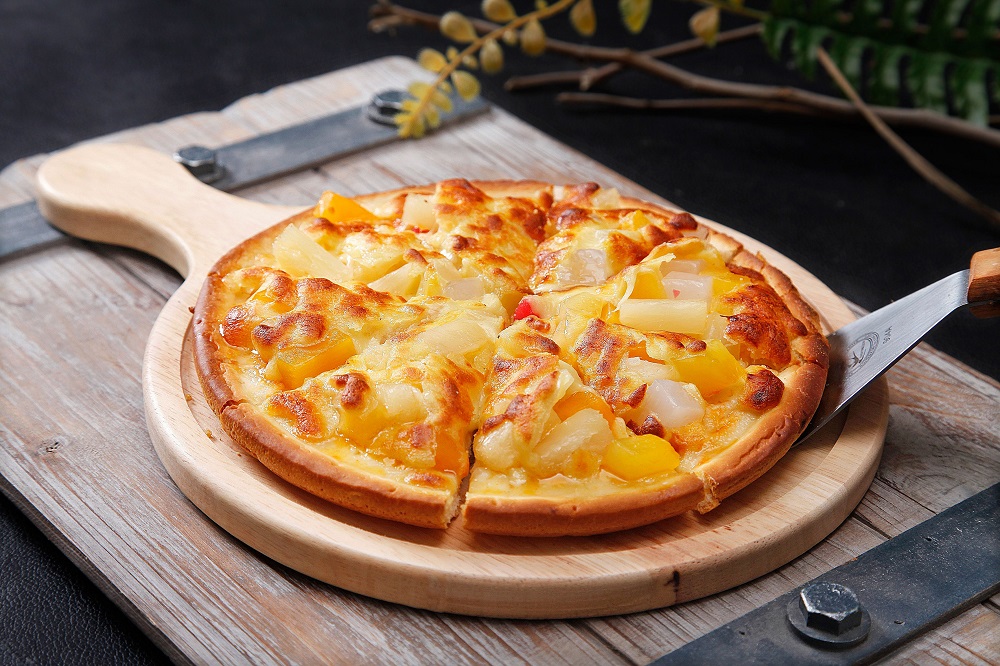 We have commonly heard of combinations such as chocolate-dipped pretzels and salted caramels. These are a combination of sweet ingredients with salty ingredients, and they turn out to produce a fantastic combination.

This is the same case with pineapple on a pizza. It is not entirely strange; pineapples are sweet, and mixing these with salted bacon and cheese produces a fantastic flavor to the taste buds.

It is important to note that you need to be mindful of your pineapple’s taste when using pineapple on your pizza. Pineapple can be sweet or sour, depending on the type of pineapple or the ripening stage.

If you use a sour pineapple, you will not enjoy your pizza because this sour taste will interfere with other ingredients you have used in the pizza. Instead, it is helpful to use pineapple that has ripened and which has a sweet taste.

Another factor to consider is the number of ingredients to use. While pineapple is the primary ingredient that makes this pizza unique, it would be important not to abuse or overuse it.

If you apply too many pineapples, then the result is that the pineapple’s flavor will overpower the flavors from the other ingredients present in the pizza. So the trick is to keep things moderate so that all the ingredients can be felt.

We all know that pineapple contains some acidity amount. If you are going to use pineapple as your topping, you must avoid any other ingredient with acidic content, such as pickles and tomatoes.

This will balance the amount of acidity on your pizza, giving it the fantastic taste that you require.

I would not be surprised that those who reject this pineapple pizza have done so because of how the pizza was prepared. Like any other meal, you have to give it your attention and use the right ingredients to achieve the right results.

Is Pineapple bad on Pizza?

Pineapple will undoubtedly be bad on your pizza if you pay no heed to all the tips shared above. Your pineapple will bad for your pizza when you use the wrong ingredients and means of preparation. 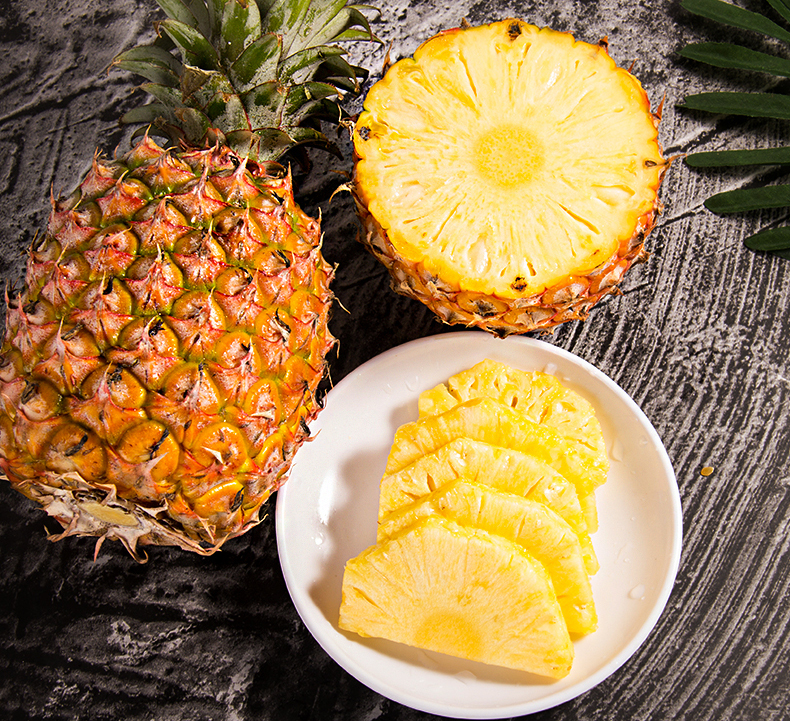 Because you want a pineapple pizza does not mean that you get to add any ingredients without paying attention to which ingredient works best with pineapples.

By the way, you should get to taste the pineapple pizza from Pizza Hut if you have never tried it before. They serve one of the best pineapple pizzas you can find around.

Any benefits of Pineapple?

Pineapple as fruit has several health benefits. First of all, it contains vitamin C, fiber, and potassium. These vitamins and minerals help you with digestion, especially if you are undergoing constipation.

Also, pineapples contain manganese, which serves as an antioxidant in your body, expelling harmful materials. And if you are looking to boost your immune system, you should rely on the Vitamin C that pineapple offers.

For some people, it isn’t easy to find them eating plain fruits. Adding pineapple to your pizza might be the best way to make sure that you are eating your fruit and bringing a balanced diet to your pizza.

Most people sometimes complain that pizza is junk food because of all the meat and oils. So if you are going to have a healthy topping on your pizza, why not?

Celebrities Opinion on the Debate

Well, a lot of famous guys have come out to express their opinions about this same subject. The famous Celebrity chef Ramsey while on a live show, once exclaimed that pineapple has nothing to do with a pizza.

Most people of the same view seem to have been happy, stating that no one should dispute it if an acclaimed chef has said it. Well, this is not really the case; Chef Ramsey was speaking from his own prejudice or what he likes, so we cannot say that he has the final word.

Also, Canadian Prime Minister Justin Trudeau is on the other end of the debate, and he seems to be fully in support of pineapple as a pizza topping. Those in support of this view also took to social media to support the Prime Minister. Well, the question remains, do celebrities or public figures hold the final truths?

They are all expressing personal opinions, and we can differentiate that from objective facts.

Should pineapple on Pizza be a debate?

Actually, when we look at this issue closely, putting pineapple on pizza should not be a big deal for people to contest and debate about. You might ask why? Almost everyone has different tastes, and the way things work, most people can customize their pizzas according to their personal taste.

Hence putting pineapple on your pizza is a personal taste that no one has to argue about. This is because you are the one who is eating it, and you are not forcing it on others.

When it comes to taste, there is no dispute. If it works for you, then you should personally go for it.

If pineapple on pizza is not your thing, then you should stick to what works for you. This way, everyone is okay, and we do not have to fight about it.

If you are hoping to order pizza together with your friends or family, the best thing is to make sure that everyone agrees on what they want. It would be easier for you to order differently s that it does not cause much controversy.

There is nothing wrong with pineapple on a pizza, health-wise or taste-wise, people have differences, and each side wants to prove that they are right. Well, I think the taste is subjective, and everyone should try what they want.

At the end of the day, we all enjoy our pizza in a certain way, pineapple or no pineapple, so enjoy it while you can. But you can join the argument and debate with friends and family just for the fun of it.

By the way, if you have not tasted pineapple on pizza, then you should do so. This is the only way you can appreciate or contribute to this hot ongoing debate.