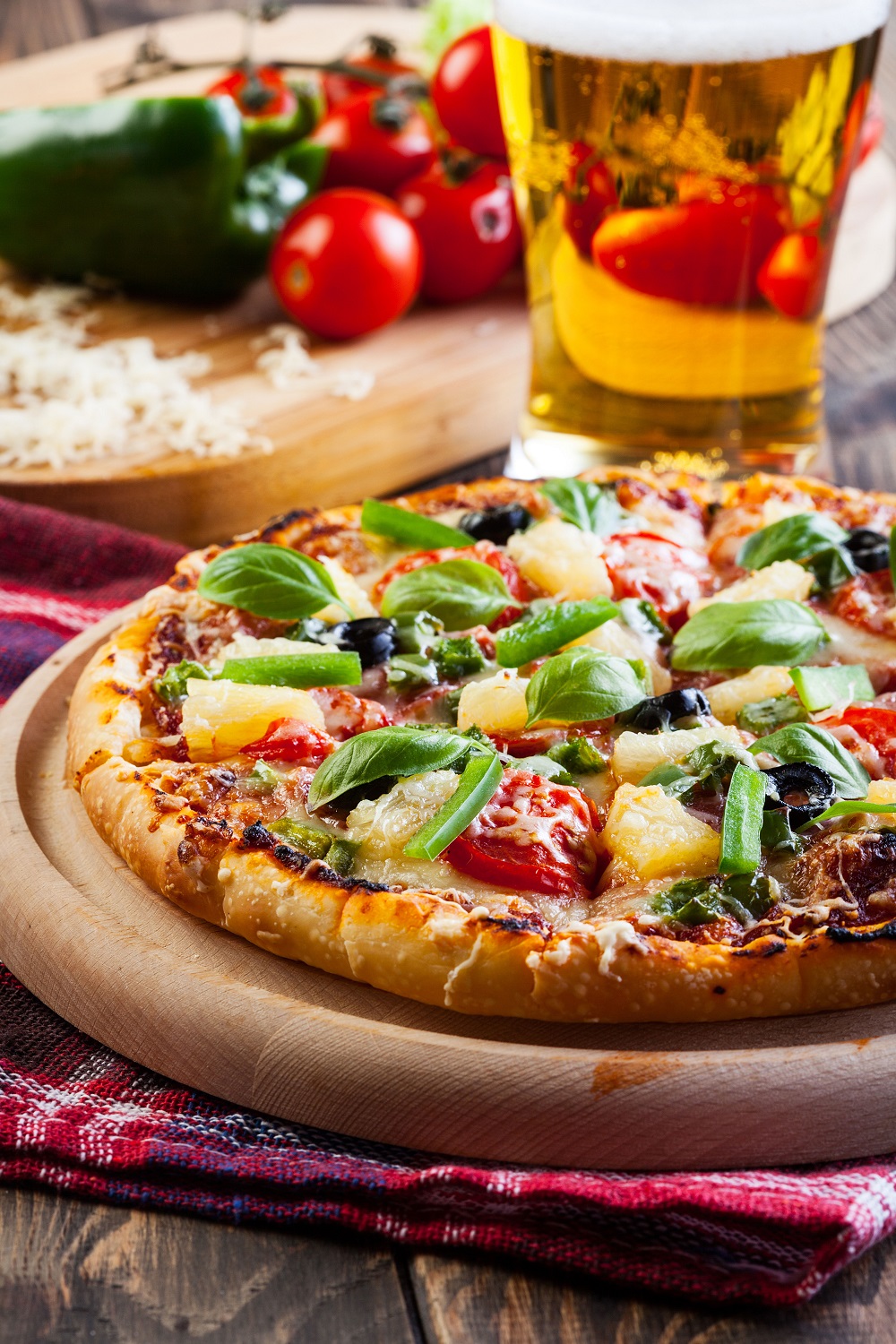 Pizza and beer essentially are a matchmaker. As much as they are both deliciously consumable in their ways, you can never go wrong by combining the two.

Essential things to know about the beer with pizza

Did you know that beer helps reduce the level of sourness in the tomato source in the Pizza? Hence if you are used to experiencing hurt burns after eating Pizza, in this case, beer can act as a base?

Also, the cheese, oil, and bread work handy in ensuring that the alcohol contents are not immersed in the blood system, meaning you can have couple more drinks without having to feel the effect of the alcohol contents in your body. Beer further has some soluble fibers that help with digestion, thus living you ready for the next munch.

An essential guide to keeping in mind when you are pairing beer with Pizza always considers two things: the toppings of the Pizza and the hopping of the beer. A good example, Margherita that has mozzarella, basil and tomato source thus you need more hopped beer. So you can use (pale or amber larger)

So, next time you have some round table nights with your besties, you have all the reasons to try some beer and pizzas out from the everyday wines and cheese because these two complement each other.

Quick enlightenment for those new to Radler’s term is a German term for a beer whose ingredients consist of citrus fruits, mainly lemon or lime.

Once in a while, Break the norm of eating the standard pepperoni, sausage on pizza toppings, go aqua and adventurous and try seafood pizza nights with tilapia, Anchovy, calamari, and shrimps’ toppings served with your favorite cold Radler beer and make those nights spicy and memorable.

This is specifically to those who fun of chili. Usually, when we mention flavor, the only thing that comes in our mind is the taste and smell; we forget about the chilies’ burning sensation.

Just so you know, it is equally part of a flavor, so when next you talk about flavors, don’t forget about the chilies now you know.

Matso chilly beer is the most renowned chili beer globally, specifically produced to suit the chilly lovers’ needs. Keep in mind that the way the cayenne chili’s sensation in the beer travels from the mouth to the ears and the nose is a good treatment dose for people suffering from sinuses.

3. Hawaiian Pizza and the Golden/summer ale

Mention Hawaiian Pizza and recall the pineapple toppings that bring that richly profound delicious taste to the Pizza.

The summer ale beer is a kind of refreshment with some mild lemon flavor, crispy and has some slight sweetness and very easy to drink.

Just as the names suggest ‘summer,’ what pictures come to your mind? The summer afternoon moments where you relax at the beach, enjoying the feeling of the sun’s rays on your body while quenching your thirst with a cold Samuel Adams summer ale beer.

Meanwhile, responding to your stomach’s hungry needs with a delicious Hawaiian Pizza, what an exquisite combination.

You can also try ‘park life passion fruit ale,’ which has a tropical aroma and crispy flavor. These can further accentuate your Hawaiian Pizza.

Wheat beer is produced from the grains of wheat, where the grains make a large fraction of its available flavor. It is usually intense work to brew it because extracting the proteins and starches to make sugar is hard. They are compact.

However, they have that crispy texture that brings about some deep feeling when added to the flavor. There is a variety of them, ranging from the American wheat beer to the German Witbier hefeweizen.

For those of us who see cheese and go awe!  As the name suggests, the four cheese, Parmigiano, Gorgonzola, Fontina, and Mozzarella mixed, is a perfect blend with wheat beer that further lives you with that feeling of wanting some more.

Porter beer is produced from the brown malt, hence its dark color. Porter beer and stout beer are the same. The difference comes when one (stout) is more than everything, including the range of flavors, texture, and taste, also known as a double porter.

BBQ swirl pizza at a glimpse is all BBQ meat or BBQ chicken, for the meat lovers you can never go wrong with this kind of Pizza and to top it all with beer and not any other beer but porter or stout beer a perfect mishmash if you want to chill with your friends at home or rather just binge-watching.

BBQ pizza, since meat forms its basis, is appreciable to combine it with some smoked beer like Rauchbier, among other beers that you can enjoy throughout the year.

Pepperoni is an American topping on the pizzas that comprises a blend of pork and beef flavored with chili or paprika.

Indian pale ale has some level of bitterness with less alcohol content and high hoppiness, especially friendly to those who don’t like too much alcohol but love the taste of beer.

When taken with pepperoni pizza with its spiced ingredient of paprika and chili brings out these tastes while harmonizing the salt, thus making those Friday night pizza a boom!

Pale ale beers are mostly beer prepared with malt flavors that make it have a lighter color and relatively gentle hops, while pilsner is both spiced up with fewer hops. Malty flavored a combination of these gives it a crispy and well-revitalized taste.

On the other hand, Margherita pizza is typically simple Pizza made from mozzarella cheese, tomatoes, fresh basil, and some extra virgin oil and salt.

When you feel like having fun but also maintain simplicity all the way, think pale ale beers or pilsner. They will clear your stomach faster, creating room for more Pizza intake. Also, it makes a perfect blend with the Margherita pizza, which is relatively simple and contains easily digestible ingredients.

Rarely do you find foods and drinks matching, but if you do, then truffle pizza and truffle ale should be your all-time favorite match.

The truffle pizza is a kind of Pizza whose main ingredient is the truffle oil with rich flavor and aroma with savory mushrooms and gooey cheese. It is most commonly easy to make homemade Pizza.

Truffle ale and a combination of truffle pizza is the classier way of enjoying your homemade Pizza with your friends or just family at home. An example of the truffle ale is Jared Rouben’s moody tongue tasting room.

Whenever you feel like you want to go vegetarian without missing the meat in your Pizza, don’t go far. Mushroom and spinach pizza is here to give you the kind of satisfaction you want. With the vegetarian Pizza, mostly you tend to feel each flavor as it is; hence it’s advisable to pair the Pizza with beer that does not necessarily overpower it.

Stout beer is the deal-breaker here, from its full range of dark barley to the coffee like or somewhat chocolate flavor with a slight bitterness from the hops; all this range of exclusive tastes when paired with the mushroom spinach gives you a taste that leaves you craving for more Pizza.

Here you can try the European style stout tapped with some creamer disk for a perfect pour, and you will forever remember this or the Kolsch beer.

It’s a kind of Pizza with thick layer toppings and a deep crust that almost resembles a pie. Usually, the crust is covered with cheese, pepperoni, or sausages, followed by onions and mushrooms. because of its large amount of toppings to balance, it requires beer with a large amount of hopping; hence IPA comes in handy

For a better experience, use IPA, which is citrus flavored. The acidity blends perfectly well with all the Pizza components; hence, you can feel each flavor’s taste equally without having the different tastes overpower each other. I suggest the blue mountain, a hope work orange, or the otter creek fresh slice white IPA.

It’s a kind of Pizza made from chopped chicken mixed with spicy peanut with honey sesame and ginger flavors and has toppings from carrots, green onion, and sprout beans.

Pilsner is a kind of lager style beer. It blends well with the Thai chicken considering that it has a lot of toppings. Such a pizza requires a hopper, spicy, crispy, and floral beer like a pilsner. It will leave you with a clean taste wanting more of it.

It is a kind of Pizza that has a thin crispy, chewy crust prepared from coal-fired ovens.

Amber ale is a kind of English pale ale produced from amber malt, and a crystal malt hence brings out a beautiful red hue color.

You can pair any amber considering it’s hoppy with Apizza to hoist the pepperoni toppings’ spice, which further complements the sauce. Try the bells amber ale with its variety of caramel and sweetness accompanied with little apple green brings a refreshing taste that can easily blend your spicy Apizza.

White Pizza is an Italian pizza that does not use tomatoes but uses toppings such as chicken, bacon, mushrooms, herbs, and vegetables like spinach.

Flanders Brown is a kind of beer with a lactic sourness and acetic acid, giving it a sharp finish. When paired with the white pizza cuts through the mozzarella cheese and all other toppings, the Flanders brown acidity gives you a refined sweet taste with no blemish finish.

Bruschetta pizza is an Italian appetizer made from a mix of tomatoes, garlic, and chopped basil toppings.

Samuel Adams summer ale is a beer made from American wheat and brewed with a rare pepper from Africa, blended with lemon zest giving a citrus aroma and crispy taste.

Nothing lets you celebrate summer like the sharp sweetness of ripe tomatoes in this Italian Pizza with a blend of Samuel Adam’s ale spicy, citrus and fruity beer.

Pale lager it’s clean and dry, lean, and has a crispy taste characterized by bitterness and aromatic flavors.

The beer’s crispy and lean characteristics evenly blend with the thicker pan-style crust, further making it complement any other spicy toppings immersed in the Pizza.

Philly cheesesteak is Pizza layered with alfredo sauce, mozzarella cheese, other mushrooms, beef, and paper baked together to produce a meal with no blemish finish.

Lagers make the strongest beers as it ferments slowly in low temperatures giving it a light crispy and mellow taste that is smooth, making it less bitter—this lightly clean taste pairs well with the pepper and beef.  You can use these classic American lagers like Miller High Life, Coors, Budweiser, and Yuengling.

The sausage pepper onion pizza has a complex flavor, and just as the name suggests, so is the Pizza. You can still further play around with other ingredients like rosemary, parmesans cheese to give it the taste that best suits you.

Belgian ale is the perfect beer for pairing with this Pizza considering its high carbonation level and its fruity yeast that gives a refreshing finish pair well, making the Pizza’s different flavors come out perfectly.