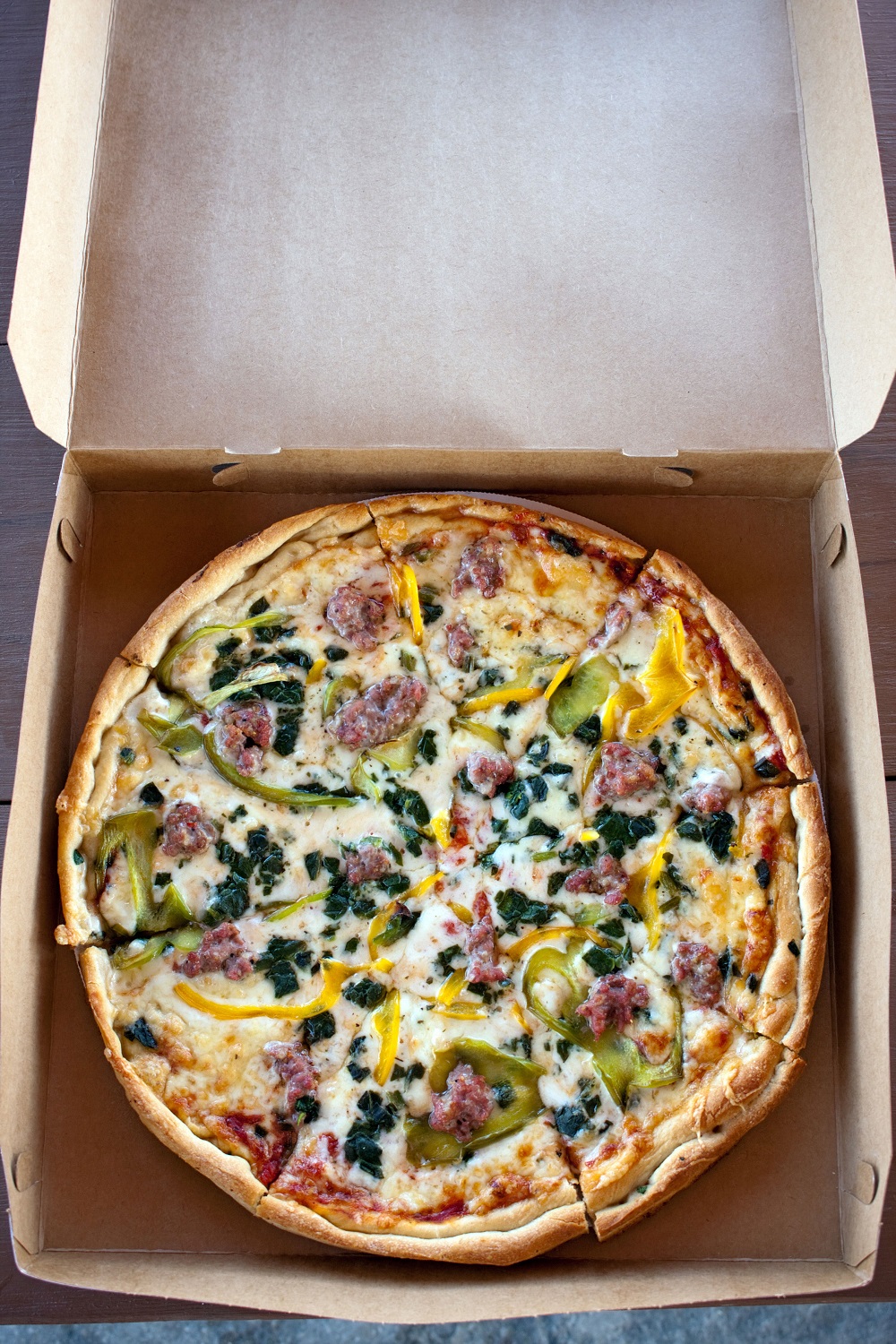 ‘Hot, stretchy, flavorful but delicious is the best description of my go-to pizza.’

The only time this question is relevant is when you want to reheat your delivered pizza. Sometimes, you have a few leftover pieces or just received the pizza, but you didn’t eat immediately.

You will need to reheat the pizza, and the oven is the best way to do it. So, can you put the pizza box in the oven too?

What do you think about putting the pizza box in the oven? Is it safe?

We have all done this at some point in life. So the answer to this question is yes and no. It will depend on a few things.

Does the box fit?

You see, some of the boxes we receive don’t fit in the oven just because our oven is small. So that’s common sense. If the cardboard box can go in, then you can heat the pizza in the box.

What temperature are we talking of?

I know what you may think ‘if it’s combustible, why are there so many people including myself setting it in the oven?’

Notice, though, that at a temperature higher than 400°F, your cardboard will most likely ignite. I sometimes set the pizza box in the oven because I don’t set it to a very high temperature.

You see, if you leave it at a temperature higher than 400°F over a long time, then you could cause oven fire. Now notice that even if the oven didn’t catch fire, you might have it char your pizza, unfortunately. No one wants to box char their pizza when we can use the oven to do so.

The essence of the pizza chain using the cardboard is to insulate your pizza, make transportation easy. They never say we can set it in the oven either.

Let‘s look at the cardboard though

Even when we decide to set it in the oven, there are things we don’t consider. Do you ever consider imprinting on the cardboard? When making the box, therefore they use dyes, decals, inks but also stickers.

Notably, the layer that’s in direct contact with the pizza has an anti-grease layer set. This means the layer will have some chemicals.

Depending on how long you leave it on heat, it will begin to melt and even leach into your pizza or enhance the combustion under the heat.

So then the worst is that it will cause an alteration to the taste of your pizza. Can you imagine eating your pizza that tastes like some paints and dyes? In such cases, it’s not only the taste that is bad but also unhealthy.

Why do people want to use the cardboard in the oven?

We believe that it will sometimes help to retain the structure of the pizza. The crust will be as crunchy as you bought it, the cheese will be as stretchy, the sauce and the meat remain perfect too.

Why do they use a pizza box for packaging the pizza?

So then why do they package using the box if it’s unhealthy?

When you’re not heating the card box, it remains the safest to use, you know. As the pizza guy is transporting the pizza, you will have the pizza in the box jostle around, and that will often alter the temperature if you are using the regular bags.

A pizza box may not entirely stop the movement, but it will regain the temperature by a certain level.

The box is further the best way to make sure you maintain the toppings and cheese in place. No one wants to eat pizza that has all the ingredients scattered all over.

Another reason the pizza chain uses the pizza boxes

In the past, they didn’t use the pizza box for packaging. They at first just used the bags, which also meant that it wasn’t in shape when the recipient received the pizza. Another thing was that the pizza would reach your places, having lost the temperature already. So you wonder ‘why did they decide to use the box for the pizza?

When we talk of the cardboard, if you have been to any restaurant as they are packing the pizza for you, you will notice that the box is usually at the first flat. When they are then ready to use it is when they fold it to shape. This means it’s easier to store in the kitchen just because it doesn’t take too much space.

What you also didn’t know is that it will accommodate any pizza style-rectangular or circular. It doesn’t matter which one you would like to.

More than anything, the cardboard makes it easy to retain the structure of the pizza. It doesn’t matter the weight of your pizza; the card box can likely hold it comfortably. Besides, it does all these without really flexing or even folding to break.

If you look at it, though, it’s the geometrical design that gives the pizza its stability.

If you are like me, then you know that the only reason we go for pizza all the time is the difference in flavors and texture of the toppings but with the crust too.

The secret to the regular crispy pizza is to make sure the box you are using is not airtight locked. It should have some holes for the hot air to circulate. Don’t even think about the weakness of the hole because it remains healthy.

We always want to have the pizza being in the perfect shape. You may not see it as much, but they focus on the inner lining of the box. It’s the one that comes to direct contact with your pizza.

In some cases, you will have the box’s inner parts having a very thin layer of aluminum. The essence is to ensure your box won’t absorb the oils, moisture, and pizza flavors.

The companies then don’t like the base part of the cardboard as we want to retain the crust crisp. If you use the aluminum lining, then you can be sure you will have a soggy mess for your pizza.

Using the paper for box making means that it’s cheaper than other options you would want to use. If they, for example, decide to use wood or plastic, you can be sure you would have the expensive mode of storage.

Can I reheat the pizza in the box safely?

People are talking about it, so there’s going to be one thing you are sure about, and it’s that you can reheat the pizza safely in the box. However, you have to follow a certain procedure and protocol.

For it to work best, set the oven temperature of the oven to about 275-300F. Again just the same way, you have to preheat your oven when you’re baking.

Once it’s high enough, then you will only have the temperature increase periodically. This is to retain the same temperature.

Now set your pizza on the second rack at least. Let it heat up for about 10-15 minutes. But still, you don’t just set it and go. You have to keep checking the pizza to make sure it’s safe, and the pizza doesn’t even get charred.

You will know the pizza is heated when the cheese starts to bubble. You want it piping hot, you’ll have it piping hot, but it shouldn’t be at your expense. Although it may work, it’s not such a safe method. So below are other safest options you can use in your oven instead.

Here‘s what to use instead of the box

So I know we said that you could use the cardboard, but again, we say it’s not that safe. This is why we say use the following pointers instead.

I love the stone cooking. It will deliver a distinct flavor, but the best part is that your pizza feels almost as hot and fresh as though you just bought it.

They will mostly use the ones that are made using ceramic or clay, and for some reason, this one will enhance the flavor of your pizza.

Besides, it will always deliver even heating, which means your pizza cooks or heats within a shorter time. So the porous surface is what makes for the even heating of your pizza.

Set it directly on the rack

Your oven will often have a rack, so instead of trying to figure out where you can set it, then do it on your rack. You know this means that there is proper heat circulation, and it will maintain the heat. In the end, expect to attain the crispy crust with this piece.

If you want, though, you can set another tray under the rack to ensure the oils crumbs and toppings falling off don’t fall on the oven floor. It will also mean that it gets easier to clean.

You can use a pizza pan

It’s important to know which pizza pan will work for you. Whether you have the pizza pan with a hole or without, it will work.

Again it’s essential to mention the advantage of having a perforated one. This will mean that you can attain the crispy crust with it. It doesn’t matter If you are reheating it or not. The perforated pizza pan is something you should use.

Again remember that it may allow for grease to drop, so you need a tray below it to make sure the oven floor remains clean. The good thing, though, is that your pizza will bake way faster than the one without holes.

Still, the regular pan will heat your pizza. However, it may not attain crispy crus. This is why it’s excellent for those pizzas with bases that you don’t need to be crisp.

The foil paper will not only help to keep your food warm; you can use it even when you want to heat some of your food.

You will not need to clean the foil once you finish, and it’s therefore ideal for those who don’t like to clean up.

It will make it easy to attain the desired temperature, but then you’ll struggle with the sogginess. Even if you had a crispy crust when you use the foil, it would lose the crisp.

Why are pizza boxes square?

Why do the boxes have holes?

Is it perfect to use the pizza box in the oven?

We have talked in length in this regard, and I know you know it now. Using the box in the oven is not the perfect option. Anything could happen, and you forget to control the temperature, thus leading to ignite.