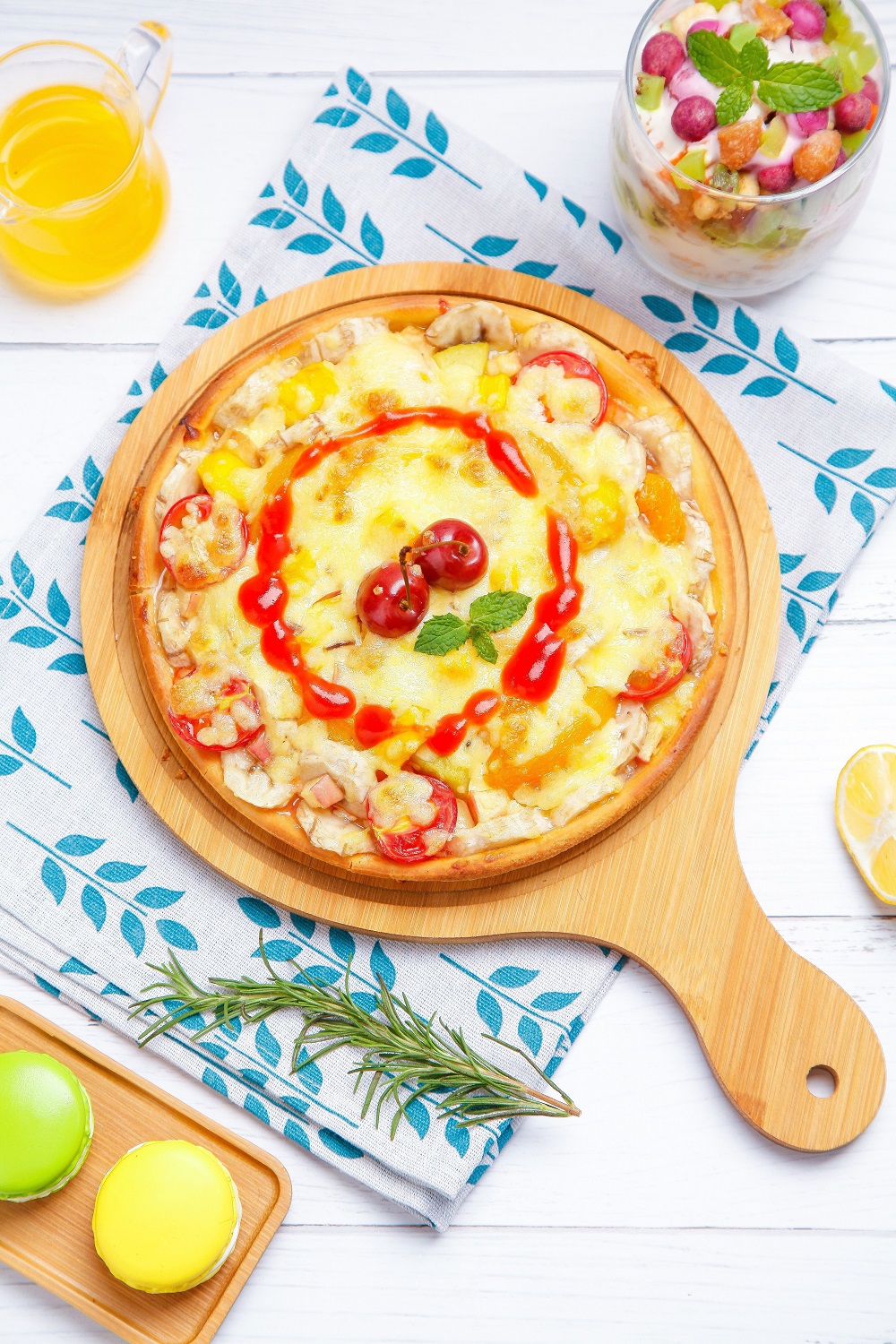 Many have called St Louis pizza the fantastic mess. Others call it a big pizza-flavored nacho. This is one of the pizzas that receives an equal number of likes and indifference.

Even some of the residents do not get it. However, the people bred and raised in St Louis appreciate it so much and claim it is an acquired taste.

Imo’s claims to revolutionize pizza, and this is one hell of a revolution. So what makes a St Louis style pizza?

A St Louis-style pizza is three things. The thin unleavened cracker-like crust, the Provel cheese, and the end-to-end loads of toppings.

Pizzerias make St Louis pizza from unleavened dough. This means that the pizza has no yeast added to it.

This is strange as a typical pizza has yeast added to it to make it puffy, risen, crusty but chewy. 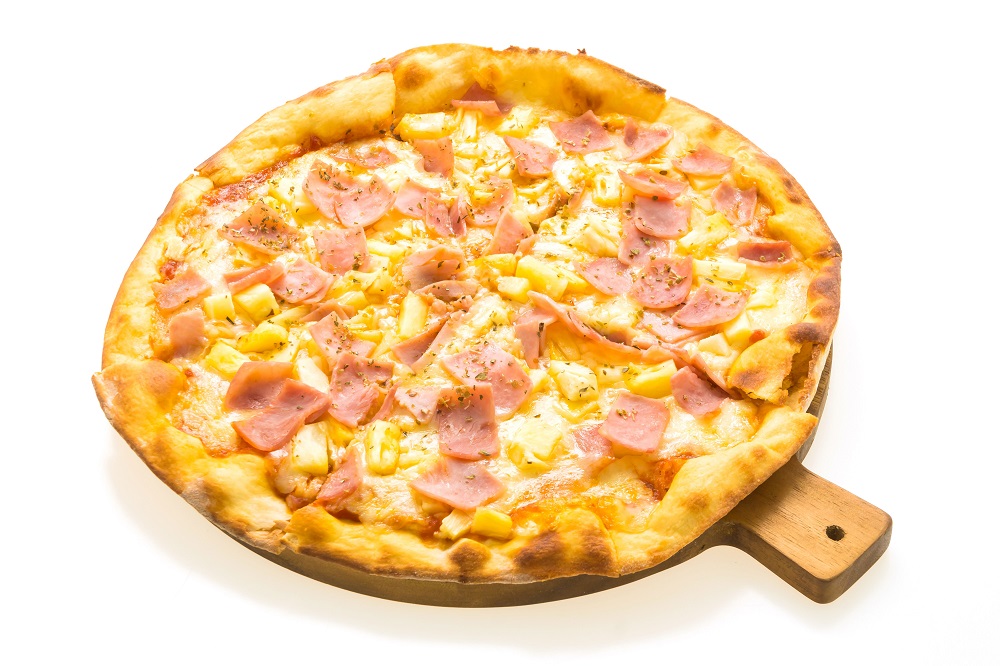 This makes the St Louis pizza crust ultra-thin and cracky, just like a  tortilla chip. No yeast also helps the pizza to have a  longer life.

Unlike other pizzas, our obscure St Louis pizza can last up to 3 days without losing its crunchiness, whether refrigerated or not.

Ask a new yorker or a person from the rest of America what is a pizza without mozzarella cheese, and they will look confused.

The pizza must have the long white cheese strand for most of us when you pick up a slice for a bite, but not St Louis pizza. Here you use Provel cheese. 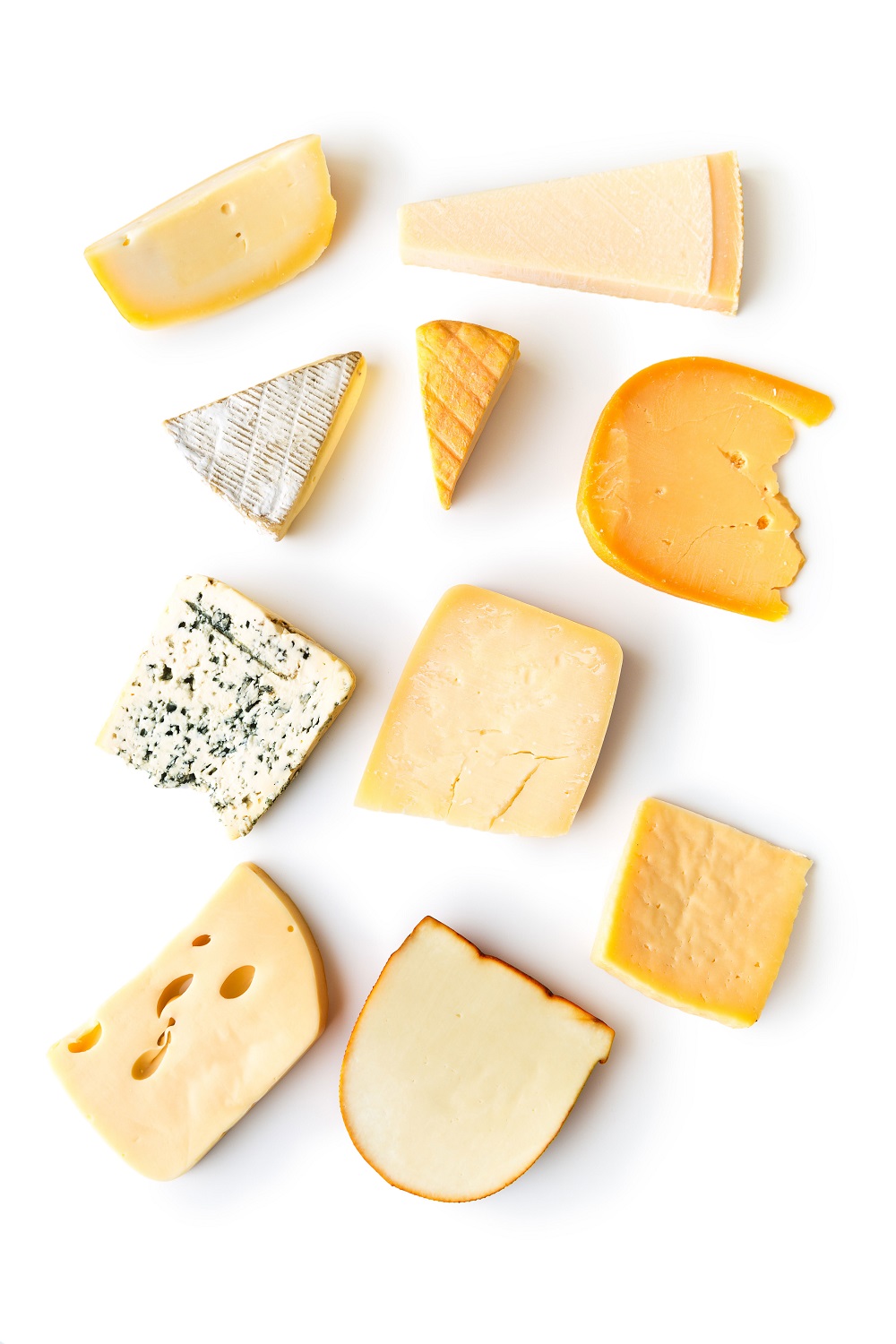 Most St Louisans have grown eating Provel, and they love it. It is delicious for some, an acquired taste for some people, yet for the rest, it is something they cannot tolerate.

Some critics have associated it with chewing a lit candle from the other end. Someone else said it tasted like plastic that they melted in the 80s.

Provel is a blend of cheddar, provolone, and Swiss. It is a processed type of cheese. It melts like all cheese does but remains gooey. It has moisture, chemical salts, and extra fat added to it.

This lowers the melting point and makes it melt quite quickly compared to other types of cheese.

Provel was made in 1947 by St Lousianas.

The beauty of Provel is that it does not lose its gooey look. You would expect it to solidify like most cheeses do but not this cheese. It is still creamy and delightful, even eaten at room temperatures, on the day after.

It is bizarre how they cut the pizza at Imo’s, st Louis style pizza favorite place. Despite being round like any other pizza, you cut it into squares. People call it the tavern cut or party cut.

Some believe it is because the pizza cannot handle all its weight because of the endless heaven of toppings.

The side of each square is about one and a half inches. This means up to 12 people can share it.

The st Louis pizza is loaded with lots of toppings, from edge to edge. For the lovers of just toppings, then you will love it! For instance, take Imo’s pizza with the works(that is a pizza flavor). 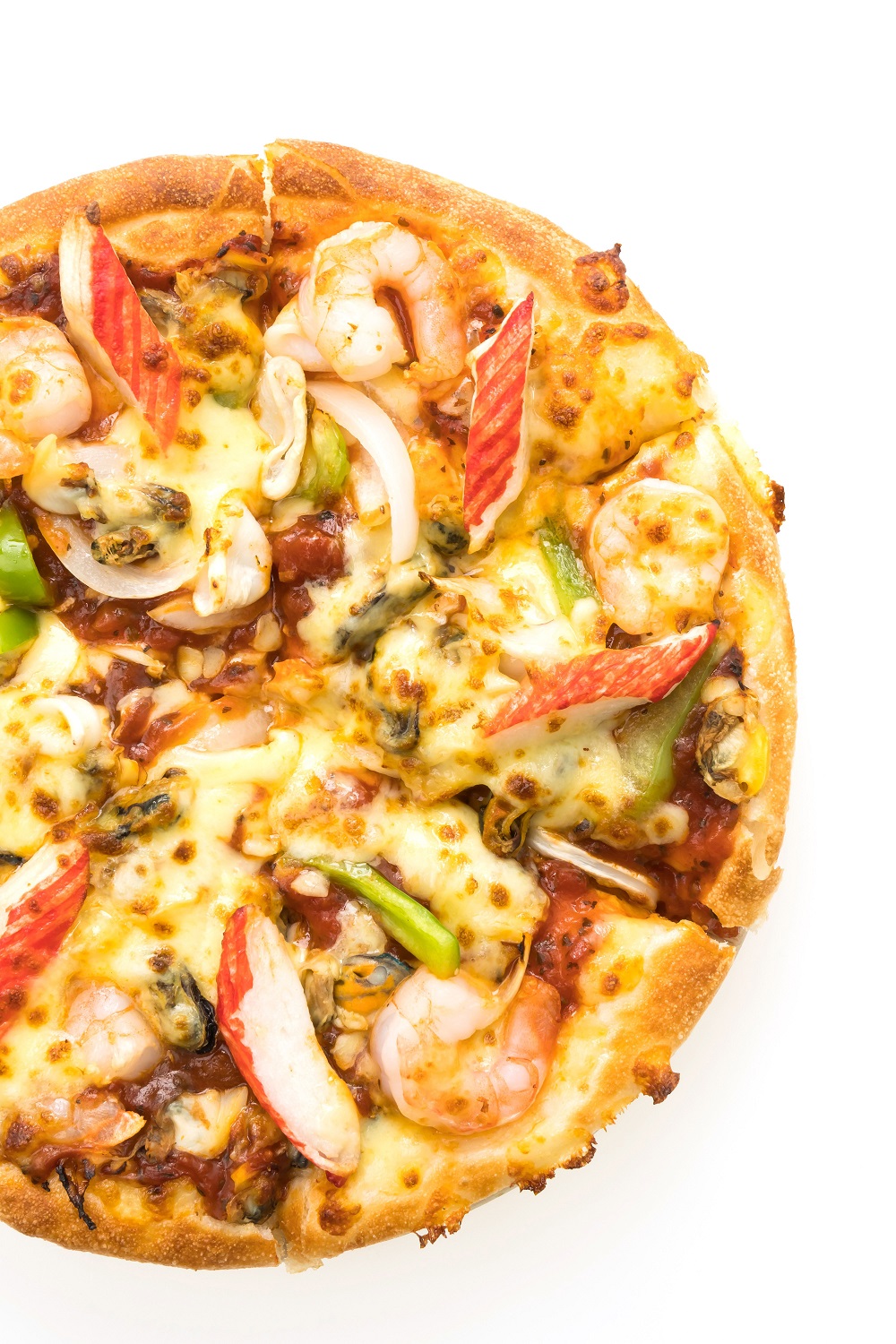 This pizza has lots of fresh and tasty bacon, bell peppers, sausage, and onions. Unlike in other places where people add the sausage in slices, you put the sausage in chunks.

The bacon is laid in ultra-thin strips and weaves over all the other toppings. It is crispy with a distinct flavor. Every bite has the delicious taste of bacon that flavors everything else.

Interestingly the bacon does not lose its crispness even on the second day. I do not know how they prepare it, but Imo should keep up the excellent work.

According to historians, Amedeo Fiore, a native from Chicago, invented St Louis pizza. Together with his wife, he opened the Melrose Pizzaria a short while after moving to St Louis.

Hack Ulrich, who worked at Chase Park Plaza hotel, had many guests returning from world war II. They wanted pizza. He kept directing them to Fiore’s Pizzaria, which helped Melrose Pizzaria to grow.

Later Fiore imported an oven from Italy. He kept trying to come up with a  unique signature pizza for his Pizzeria. Fiore came up with St Louis pizza. He posted ads on the St Louis Post-Dispatch severally. In no time, the signature dish became a favorite of St. Louisans.

He used to cut the pizza into squares. This became a vital element of St Louis-style pizza. However, Fiore’s Pizzaria never used Provel. Luca Meglio opened Luigi’s restaurant in 1953. He was also an Italian immigrant.

Luigi’s was there for 30 years. This helped in the spread of St Louis-style pizza.

In 1964, Ed Imo and his wife established a pizzeria. It was called Imo’s. They had never been restaurateurs before. Therefore, they hired a chef to come up with a unique recipe for their restaurant.

He used Provel in the recipe. This recipe incorporated Fiore’s recipe too.

Imo has significantly grown over the years and is responsible for the St Louis Style pizza’s growth and spread. The children of Ed Imo still run it.

Where can you get st Louis pizza?

You cannot think of st Louis pizza without thinking of Imo’s. This is a chain that has strived to make America aware of its authentic st Louis pizza.

Imo’s offers high-quality pizza that they make from high-quality products. It was the first pizza company to have delivery services in St Louis.

Imo’s is a family-owned business that has stood the test of time. It has more than 5000 employees with up to 100 locations in Missouri, Kansas, and Illinois. It was started in 1964, with two employees and have grown steadily over the years.

Imo’s is known as the originator of the St Louis pizza. They make pizza that consists of fresh ingredients purchased locally. They make their sauce. This is impressive as they guarantee you will be eating sauce made from natural products.

Interestingly, as Imo’s has received a loyal flow of customers who swear by it, some people hate it. Some Americans believe that St Louis pizza is the worst pizza ever made.

The representative of Imo’s says that they are not disturbed by the hate as he believes not everyone gets the acquired taste of a St Louis pizza. He also says it is okay, as the haters tend to make Imo’s famous, bringing in more business.

Speedy Romeo’s stands at 63 Clinton St in New York. It is one of the other few places you will get St. Louis style pizza outside St Louis. It stands in Manhattan and Brooklyn. Its crust is not as thin as Imo’s, but it is delicious either way.

If you are far from Imo’s or Speedy Romeo’s and would love to try the St Louis pizza, do not fret. You can make your own St Louis pizza in your kitchen.  Of course, you will have to make your special-order of Provel first.

Pi Pizza has been there since 2008. It operates two trucks in St. Louis.

It has many locations that are popular because of its fantastic pizza. According to retired president Barack Obama, in October 2008, they serve the best pizza he has ever tasted.

Antonino’s Taverna is an Italian restaurant that also incorporates Greek cuisine. It has been there since 2003. This location serves a wide variety of foods, with the St. Louis pizza being one of them.

It has a rustic atmosphere that is quite interesting if you are into the traditional decor.

Want to find out more St Louis pizza? Check out the article.

What ingredients do you need?

What equipment do you need?

The process of making the pizza

How to make a thin unleavened pizza dough

Making the unleavened pizza dough is so easy. Just remember we do not use yeast here, then follow the guidelines below.

What do you need?

The process of making the dough

What is an authentic St Louis- style pizza?

This is a thin cracker crust. Toppings cover it to the edge. It originated from St Louis, and Imo’s pride itself as the originator of the pizza.

How is it different from the other pizza types?

St Louis pizza is nothing like any other pizza. From the crust to the cheese used. St Louis pizza has an unleavened crust, which is unique in the pizza industry.

It uses the Provel cheese, which is not cheese. It also comes with a generous amount of toppings that are what most of us love in pizza.

Finally, you cut it into squares, not the typical wedges you are used to.

Why cut it into squares?

It is just how it is done and has always been done. Some say it is because the crust can not handle the toppings’ weight if you cut into wedges.

When you get your St Louis pizza, start eating the crispy triangular corners first. That is how it is done in St Louis.

Why use Provel cheese

Provel is not cheese. It is a combination of cheddar, provolone, and Swiss. This gives rise to a gooey, creamy substance that we so much enjoy.

We use Provel because it is an invention from St Louis. St Louisians invented Provel in 1947. The inventors were trying to develop something that does not behave the way Mozarella does; the long stringy strands when you pull out a slice. This is because it has a low melting point.

What if I do not have Provel cheese?

If you live far from St Louis, getting the Provel cheese might be a bit hard. But remember, you cannot use any other cheese. Do not despair; Take white cheddar, provolone, Swiss and liquid smoke.

Mix them to create your own homemade Provel cheese.

For pizza, even when it is terrible, it is still pretty good. This whole messy, weird St Louis pizza is pretty impressive. It is something you can never get out of your head after eating it. If you are a pizza experimentalist or just an adventurous person, then this is something you would want to try.

If you are one of those people who do not like the wheaty, bulky feel of pizza crust in your mouth, then you finally found the right pizza for you.

Despite the negativity associated with this pizza, we believe St Louis has something special. Whether you call it pizza or pizza nacho, it is still a delicacy that stands a chance against all the other types of pizza.