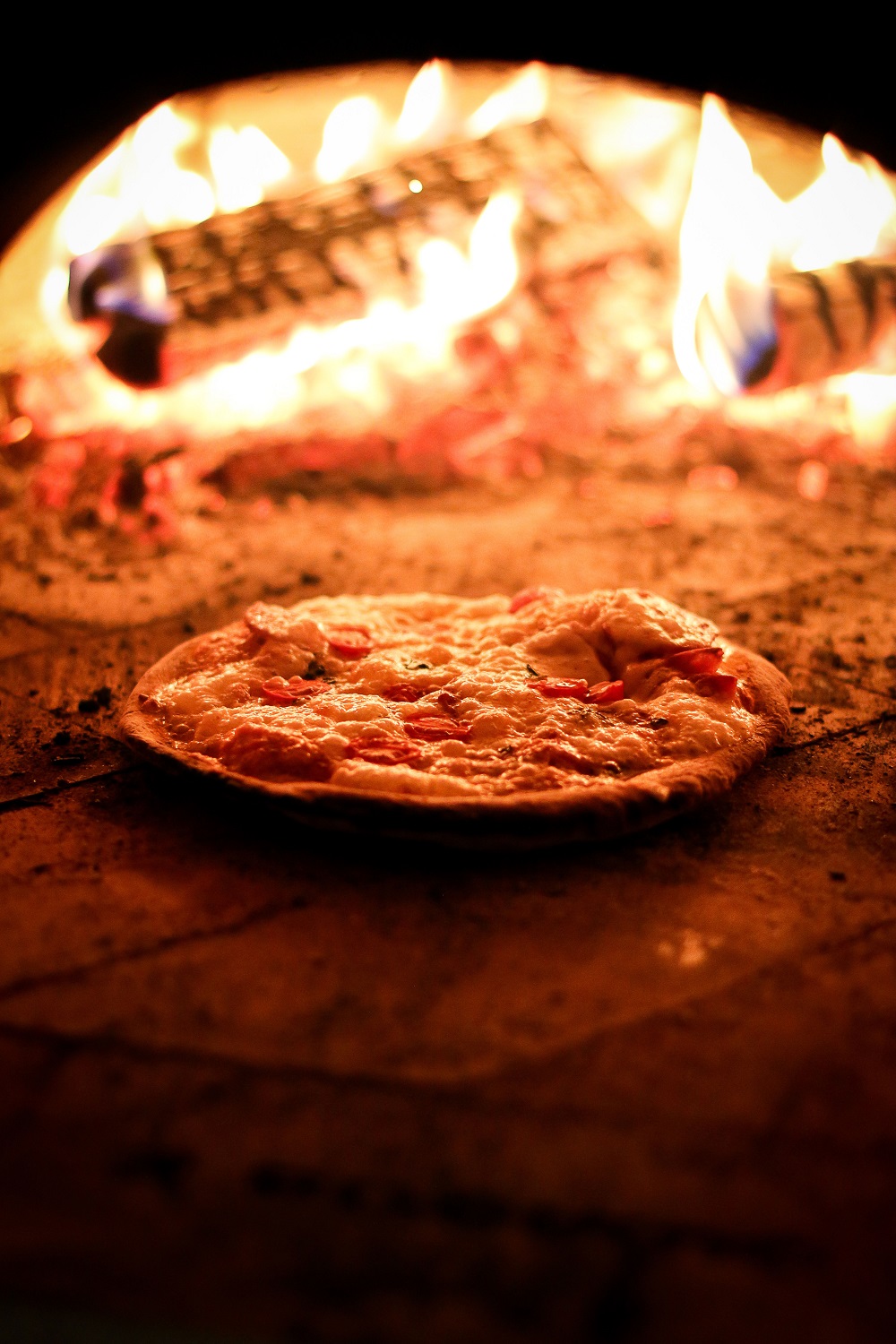 Globally, the sales of pizza have been increasing immensely and this is to show you how people have fallen in love with these pies. These delicious pies are being consumed over and over, and this is what has led to their popularity.

Styles of pizza may vary, and this is primarily influenced by the place in which you reside and what pizza style is your favorite.

For instance, you may find a thin crust pizza, New York-style pizza, or stuffed pizza.

Well, wood-fired pizza boosts the flavor of your pizza, and it also improvises by making the ingredients stand out on the pizza.

If you love making your food and want an excellent traditional flavor, a wood-fired oven will best serve you.

The working of wood-fired ovens

The workability of a wood-fired pizza oven is simple and straightforward. The only thing you need to do is to lit the fire from either the center or the side to heat the dome.

This is one of the perfect ovens you can use to create a legit pizza.

The best thing about this oven design is that it cooks and bakes by trapping the heat inside the dome then distributing it evenly in the oven. It does not cook using direct heat like gas or electric ovens. 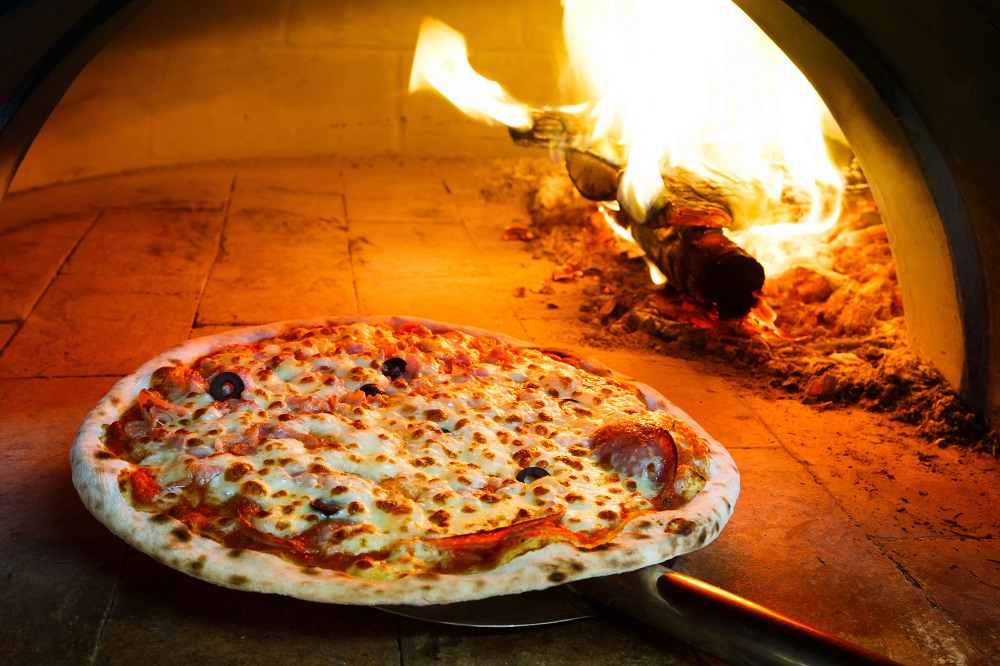 Wood-fired ovens are made with insulators that store heat then releases it. The only limitation to this oven is it takes a long to heat, but the advantage is it does not lose the heat quickly, which means you get to cook the pizza quickly and other foods.

When cooking using the wood-fired oven, you can use the woods you initially placed inside after which you can remove the woods immediately the oven is all heat up.

This is because of its ability to store heat. After this, you can bake your pizza in the oven without the woods.

Is wood-fired pizza different from other pizzas?

The difference between pizza cooked in an indoor oven and a wood-fired oven is visible from the pizza itself. The first thing that you would see is the crust.

The crust of the wood-fired pizza is always full of bubbles, either on the crust or on the pie center.

The bubble-like balls are brought by the intense heat that the wood-fired pizza oven bakes the pizza. The other difference is the pizza’s texture; the crust of the pizza tends to get slightly charred.

This does not mean that the crust is burnt. On the other hand, the top of the pizza is always chewy with a soft texture.

The texture of the pizza primarily lies in the heat that this oven produces. A classic oven that reaches a maximum heat of 500 degrees will increase the pizza’s cooking time, which makes the crust denser and dry.

What is the difference between a wood-fired pizza and a brick oven pizza?

You might just be asking yourself if these two mean the same thing. Generally, there is no difference when it comes to wood-fired pizza and brick oven pizza, and this is because each firewood is used as the primary source of heat. 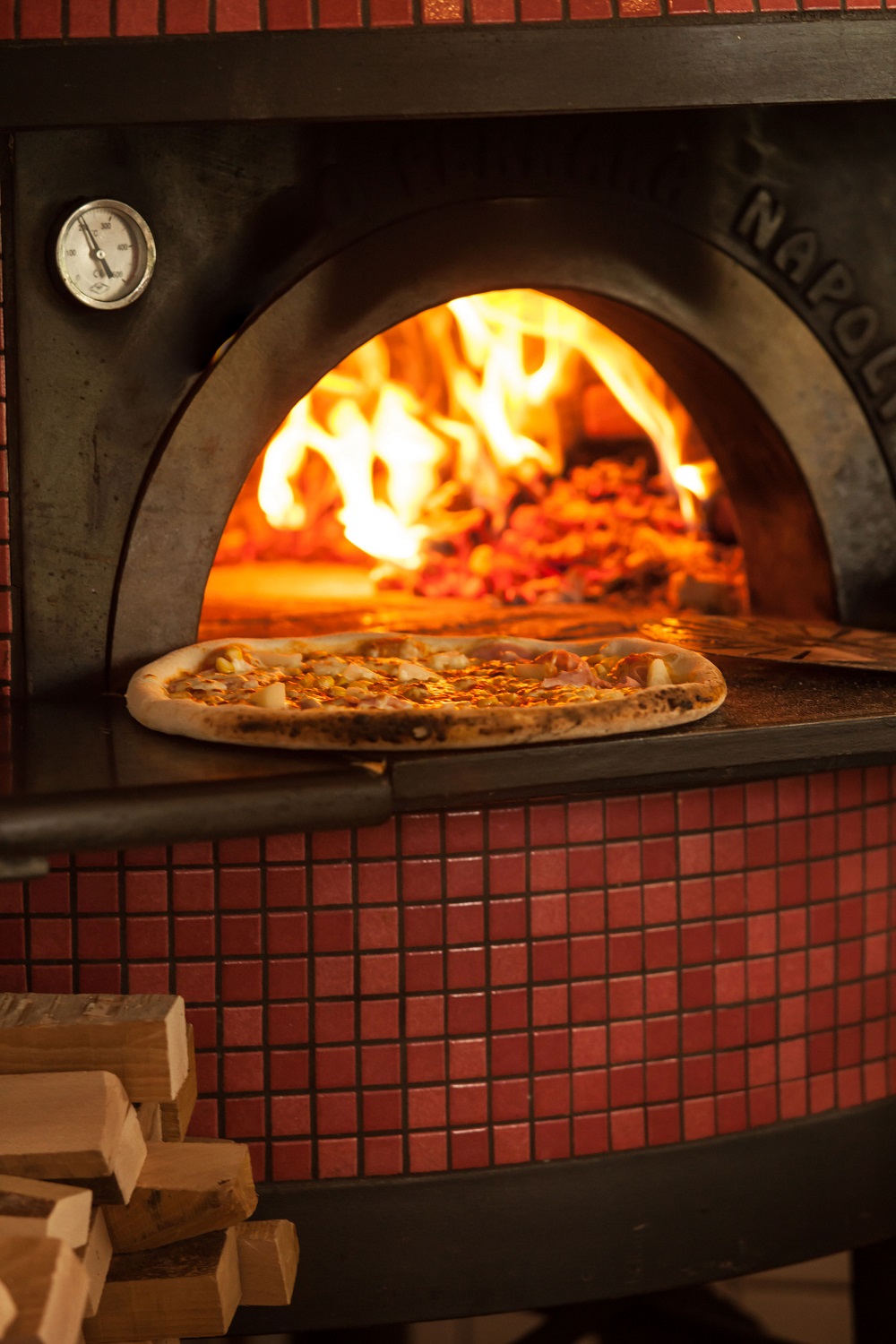 Brick oven pizza means pizza baked in a brick oven, as the name suggests. When baking pizza in the brick oven pizza, the use of woods ensures that the pizza is cooked in fewer minutes depending on the crust’s thickness.

Compared to most indoor kitchen ovens, intense temperatures are essential, especially when you have tight schedules and want something to cook quickly.

What makes wood-fired pizza different from gas and electric pizza?

How the wood-fired oven bakes pizza is different from that of electric or gas pizza. Gas ovens cook with direct heat, which means they heat your pizza or food.

On the other hand, wood-fired ovens store the heat within the oven and bake your pizza with intense temperatures and indirect heat.

This is why the crusts of pizzas cooked in this kind of ovens are slightly charred with chewy toppings.

The use of different woods when lighting up the oven introduces a vast range of flavors to the pizza.

For instance, when lighting the oven, cherry woods and apple woods will add both these flavors to the pizza. Unlike electric and gas pizzas, wood-fired pizzas are usually full of different flavors because of the use of different woods during baking.

Intense heat from the wood-fired oven ensures that you get to cook your pizza in fewer minutes than an electric or your kitchen gas oven.

The intense temperatures in wood-fired ovens have a significant role to the pizza. It is what makes the crust crispy and the texture soft and chewy.

Pizza is considered to be one of the unhealthiest dishes by many people. However, this dish does not have to be necessarily unhealthy, as many people tend to think. So, how do you make pizza healthy?

The difference is using quality ingredients and making it the Neapolitan way. 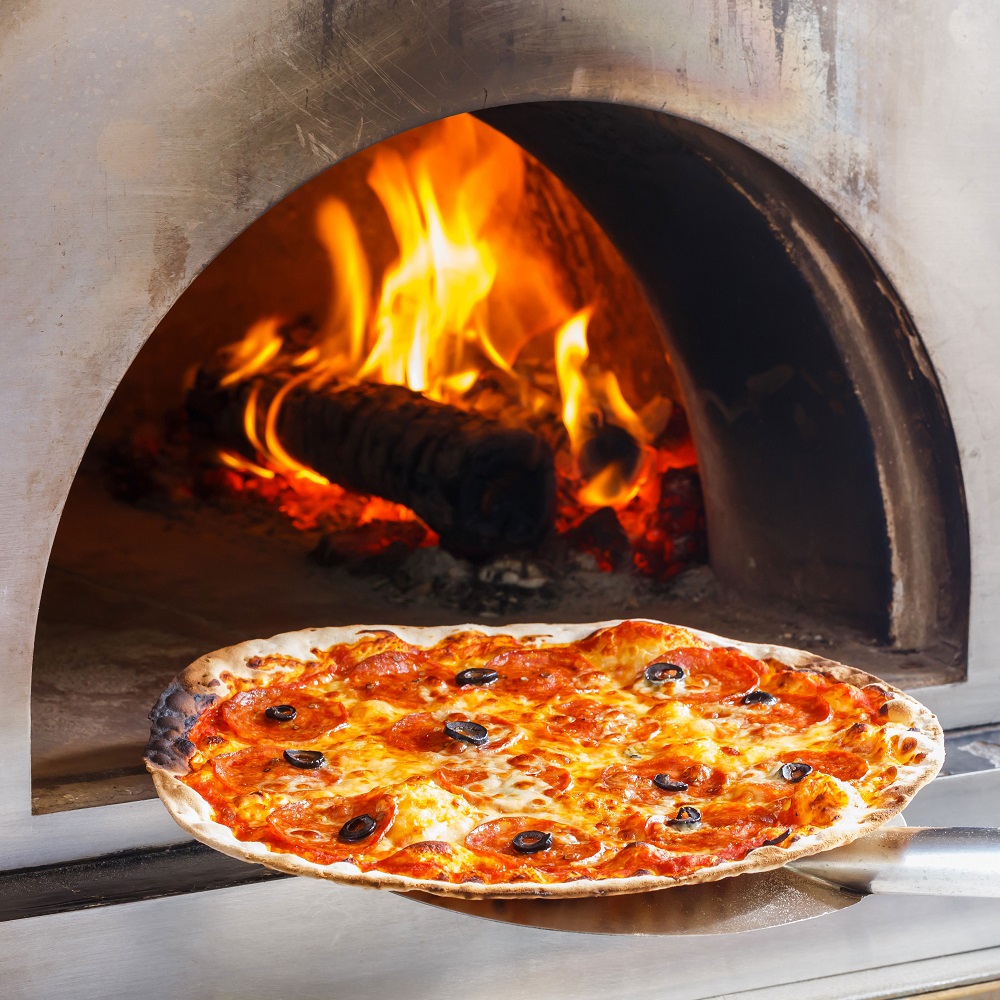 Wood-fired pizzas are often made with high-quality ingredients that are often very few, and the dough is usually handmade.

There are some concerns about the charring and smoke associated with health issues, but that is not the issue when it comes to wood-fired pizza. Wood-fired pizza cooks within few minutes, so you do not have to worry about this meal.

What are the steps involved when making brick oven pizzas?

When preparing pizzas in a brick oven, the same techniques and procedures are followed just like when making ordinary pizzas.

Stretching the dough is the first step to making your pizza, after which you follow it up with the sauce and the toppings of your choice.

However, there are certain ingredients used that changes the standard methods of making pizzas. The use of olive oil makes the difference when it comes to wood-fired pizzas.

Some people use olive oils as an ingredient when making the dough. Nevertheless, drizzling this oil while the pizza is baking in the oven is the best way to make the wood-fired pizza delicious.

Brick ovens store heat around the dome and the bricks themselves. Therefore, you can cook several pizzas in this oven for between two and five minutes. The cooking surface also remains cooler regardless of the intense heat, which means the pizza does not burn.

The signature of wood-fired pizzas is the slightly charred marks left on the pizza crust that most people do love, and this is usually the main distinctive feature of the wood-fired pizzas.

Many people prefer the wood-fired pizza other than any other pizza type. Why people love this pizza is simply because of its flavor and several other qualities. Some of the things that make a wood-fired pizza stand out include;

If you like your pizza with vegetables and fruits, you do not have to worry bout them overcooking when using wood-fired ovens. It cooks quickly and retains the nutrients found within the toppings.

The antioxidants, vitamins, and minerals found in the vegetables are not lost due to quick cooking. The intense heat also allows your pizza toppings to retain their crispiness.

If you have ever tasted a pizza cooked in a wood-fired pizza oven, you know about the smoky flavor added by using different types of woods during the cooking process.

The smoky flavor is brought by the fact that this oven designs bake the pizza evenly with constant temperatures. Replicating these flavors is almost impossible when you use gas or electric ovens because they tend to heat the food directly.

Pizza is one meal that people with busy schedules prefer, which is because of how fast you can get it done. Many people go to pizzerias to get their favorite pies, while others would go for frozen pizzas.

So, when using wood-fired ovens, the time frame in which the pizza is cooked is reduced because of this oven designs’ ability to reach extreme temperatures, which ensures your pizza is done in minutes. Still, it also depends on the thickness of your crust.

The crust of a wood-fired pizza oven is usually crispy and at the same time chewy. The reason is that the cheese and the moisture found within the toppings usually cook faster when using these ovens, thus preventing the pizza from getting soggy.

The intense heat makes the crust, and the pies get crispy in a few minutes. This then ensures that the crust’s moisture is sealed within the dough, which means the pizza does not get affected by the intense heat.

The crust’s sealed moisture content ensures that the crust does not get mushy and soggy, which makes it easy for the crust to support the toppings properly.

Is wood-fired pizza better than other pizza alternatives?

No pizza tastes perfect than a wood-fired pizza. The pizza gets cooked adequately on both sides, and this is because of the dome shape oven.

The use of wood when cooking pizza also has significant benefits to the pizza. Wood is a non-renewable and carbon-neutral heat source that makes your pizza clean and tasty.

Oak is the best wood to use for pizzas as it burns slowly due to its hardness. However, when looking for a specific flavor, for example, apple, consider using fruitwood.

So, is wood-fired pizza the best pizza option? Well, this question varies from one person to another, and this is because of the different taste buds that every single person has. Nevertheless, if you want a crispy pizza and chewy on the top, a wood-fired pizza will make a good alternative for you.